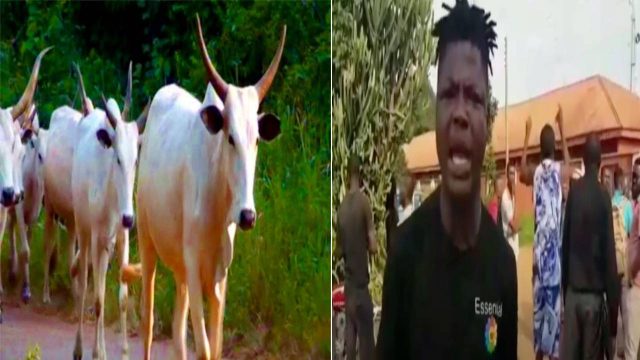 Some residents of Egor community in Edo State have taken to the highway to protest against herdsmen invasion of their forests.

In a video seen online, one of the youths of the community said they had gathered to protest against the incessant killings perpetrated by Fulani herdsmen in the area.

The young man noted that herdsmen attacks have become more frequent in the community as the herders have taken over the highway, shooting without control.

Married Woman storm hospital, fights her sick Husband’s side chick while she was Na£ked (video)

He also said the people of the community live in fear as many have become victims of herdsmen attack.

He called on the governor of the state, Godwin Obaseki, the police and other well-meaning individuals to save the people.

According to him, they are powerless, in contrast to the herders who possess arms and ammunition.

He said, ”We have come here today, not to fight nor for war, we have come in peace. We are not safe again, we can no longer go to the farm for fear of being killed by Fulani herdsmen who have taken over our farms.

”When our people try to go from here to Benin, to purchase items… that is after working here and gathering some amount of money, once they get to the road, Fulani herdsmen will stop them half-way, attack our women, and men take them into the bush, from there, they rape some of them, they kill some, they then ask for ransom.

”Right now, we are gathered here because of what happened yesterday. Some men from Esan who were going to Benin were attacked, one of them was going to buy provisions, he was shot in the hand and died.

”Apart from that, some white men were going to the Owan area, the herders kidnapped the whites, shot some policemen, and many other things happened.

“Fulani herdsmen have decided to stay on the highway, and started shooting sporadically at people, we don’t have any ammunition, we don’t even know how to use it. We simply want the government to come and rescue us. We don’t want problems, we cannot fight but we will talk to save ourselves.

“We plead with Governor Obaseki and other stakeholders to come to our aid, we don’t steal, we farm with the little we have. We have graduates in this area, we don’t steal, all we do is farm. Should we be subjected to this? Can’t we talk, they should come and rescue us, we are pleading.”