Residents of Kusfa in Zaria, Kaduna state have organised a prayer session to tackle the insecurity in the country.

The residents who slaughtered two rams as sacrifice during the prayer sought Allah’s help to win the war against kidnapping and banditry. 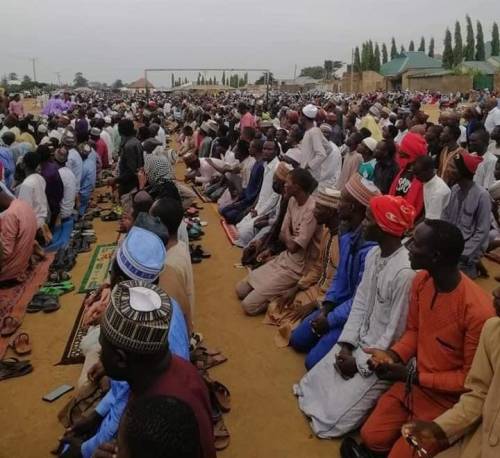 The prayer is coming a few days after the Emir of Zazzau, Ahmad Bamalli cried out that Zaria Emirate was under the siege of bandits.

According to the monarch, Zaria city and its surroundings are experiencing incessant attacks and abductions.

Bamalli stated this on Monday while hosting a delegation of the heads of security agencies serving in Kaduna at his palace.

The delegation was led by the state’s Commissioner for Internal Security and Home Affairs, Samuel Aruwan.

He said despite the location of military formations and training schools in the emirate, the area is not secure.

“There are many villages where the residents cannot sleep because of gunshots and the village heads are crying profusely at the palace over the deteriorating security condition in their domain,” Bamalli said.

“This is how bad it is in some parts of the emirate.”

The incident makes it the fourth attack on a school in Kaduna state in 2021.

The bandits continued the siege for many days, attacking Kofar Gayan and Kofar Kona areas of Zaria and abducting many residents.