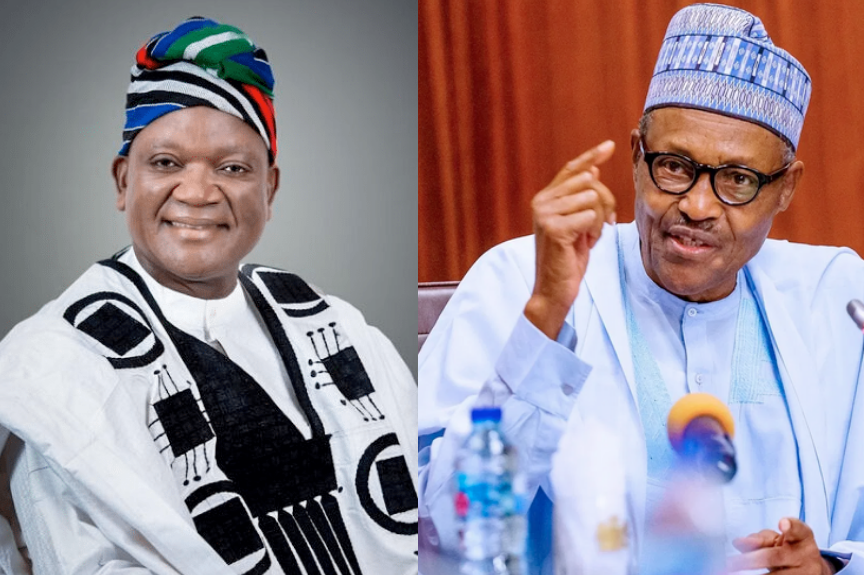 Governor Ortom made this disclosure during a chat with journalists where he stated that if the President is ready to stand against insecurity, it will surely be no more. He also went further to attribute part of the blame to Buhari’s advisers for causing his problems.

”Right now, there is nothing in this country under this APC that we can say that they are getting it right. Is it security? How can Northern governors, Southern governors, National Economic Council, come out with a policy that will stop the killings that are going on in this country and the presidency will say that no, it will not accept that it must be open grazing?

Where are you going to do open grazing? Is it in Vandeikya, or in Guma or Otukpo, or in Makurdi, or where without them encroaching on somebody’s farm? I think those who are advising Mr. President are the ones creating problems for him. And he needs to think twice.

The national economic council is a council made up of all the 36 state governors of this country. If they sit together and resolve, under the chairmanship of the Vice President, why should you reverse that? Why should he allow an appointed person who has not worn councilorship election in his life to come and reverse what 36 governors who are elected by the people have done? That is not right. So, I’ll repeat again that Mr. President is the one creating insecurity in this country. The day that he says let’s solve this insecurity problem. that problem will be solved. That is the truth. Because like this one on open grazing that he is insisting, it will only succeed in bringing crisis and chaos and lawlessness because most of us, I won’t speak for other people but in Benue, there is no room for accepting open grazing. And no room to allow them to talk about reviewing land use act. Land use act is a constitutional matter and before it is reviewed, it will come to the states. And Benue, even without the review, is saying no.

We are not going to allow that review. Land still remains under the custody of the state governors on behalf of their people. Security that we were promised in 2015 is not there.

Talk about corruption, we have never seen worst corruption like what we are seeing today in this APC led government. Where is that Minister that the EFCC Chairman apprehended for buying property for 37 million dollars and remitting 20million dollars? Where did she get that kind of money if not from government? Look at what is happening in the petroleum industry? Stealing all over the place.

Look at members of the federal executive council who had known EFCC cases that amounted to billions. Today, because they are in the ruling party, their sins are forgiven. But if somebody steals a chicken you will go and jail that person. Is that justice? That is not Justice. Where is the electricity that we were promised in 2015? Corruption all over the place. And they go after people without any form of corruption. In Benue, everyday, EFCC are on the neck of my servants. They are there all over the place. But they have not found anything and we have not done anything.

Why can’t they get those ministers who are hiding because if they remain in any other place, EFCC will apprehend them? I want to tell them that APC will not remain there forever. PDP was there before. But one day, it came that PDP was no more. And today, it’s APC. They will not remain there forever. And all these things they are doing, when the day of reckoning comes, all of them will be apprehended. Nobody will escape justice. Yes, they can have their way, but one day, when God decides that this is the day, nobody will escape. Many days are for the thief but one day is for the owner.

Let this be known to APC government that what they are doing, going about to intimidate people to join them, I have refused to join APC. I remain in PDP and I remain with my people and continue to work with them and I will continue to ensure that the mistake that PDP made before are corrected so that together we can move this country forward.

Today, APC has failed this nation. All that they are doing is to intimidate and coerce people and try to blackmail some people to let it look as if they’re saints, they are not saints. They are all evil agenda. So, Please, let no one be deceived. There is no u-turn in what we are doing in Benue State. We can never do u-turn anyhow.”