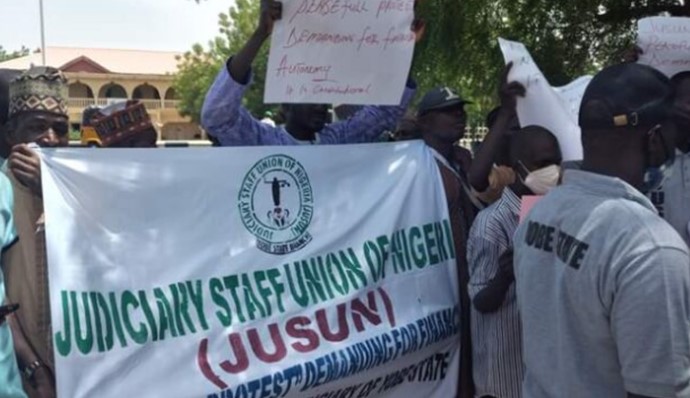 The nationwide strike by the Judiciary Staff Union of Nigeria (JUSUN) has been suspended after over two months.

On April 6, JUSUN embarked on a nationwide industrial action in protest of the non-implementation of financial autonomy for the judiciary.

However, the union resolved to suspend the industrial action during its national executive council (NEC) meeting, which held on Wednesday in Abuja.

Speaking with TheCable after the meeting, treasurer of the union, Jimoh Alonge, said JUSUN decided to call off the strike following the intervention of the National Judicial Council (NJC).

“NJC, which is the highest body of the judiciary, appealed to the union to give them two to three months to weigh into the matter and make sure they actualise what we are asking for. They noted that the public is suffering. We decided to accord them that respect,” Alonge said.

President Muhammadu had, in May 2020, signed an executive order granting financial autonomy to both the judiciary and legislative arms of government — but the order was suspended after state governors raised concerns.