Some groups on Wednesday led a protest in Soweto, South Africa, calling for the expulsion of foreigners and non-nationals which led to tension in the South African city.

According to reports, the protest tagged “Operation Dudula” saw violent groups calling for a protest against foreigners – a march which started at 8 am at a hall in the Diepkloof area of Soweto.

Posters were shared widely in the town, calling on the non-nationals to leave the Soweto area before Wednesday, June 16. 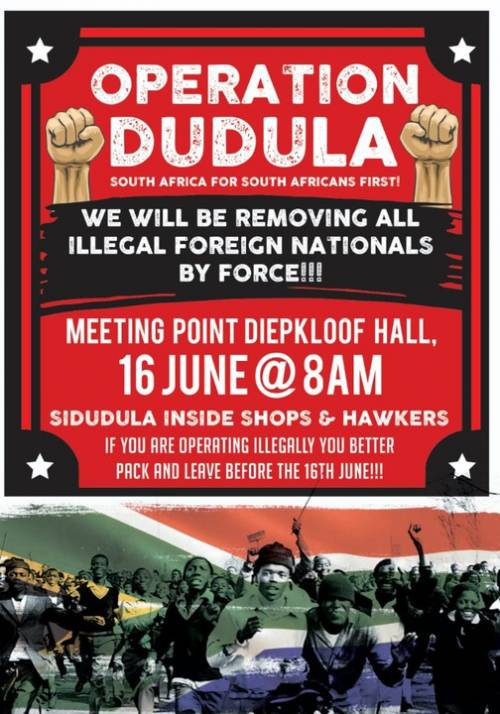 It is not clear yet the steps which the South African authorities are taking on the matter, but the police were seen around the protesters trying to prevent them from breaking into people’s shops, according to Newzandar News.

A local member of Operation Dudula, however, claimed they were targeting criminals such as drug peddlers, cult members, and others.

Some other protesters claimed that they wanted “undocumented, immigrant business owners, to be removed from the area.”

Soweto is South Africa’s largest and most influential township, from where large xenophobic attacked originated in previous years.

A Nigerian lawyer based in South Africa also confirmed the fresh protest in Soweto, saying since 2008, they had lived with the “ominous increase in xenophobic threats and attacks on an annual basis.”

He said, “This recent incident under discussion is not an isolated incident but one of the many ugly manifestations of xenophobia.

“I must confess that the South African Government is trying its best to curb and contain it but, many of these incidents are instigated by politicians and the so-called elite so to gain political mileage and to score political points

“Some of the attacks are instigated by lack of service delivery and the rising economic crisis, there are incidences of competition amongst locals and foreigners and there is also the element of jealousy, in the sense that the locals observe several foreigners whose businesses are thriving as opposed to theirs. Meanwhile, these foreigners had arrived in South Africa with vast business experiences and substantial capital.

“If you carefully observe some of the latest xenophobic attacks, you can tell that the locals don’t want foreign long haulage drivers to move the cross-border goods trailers and trucks in and out of South African borders. The foreign drivers don’t mind being paid less than the government-approved minimum wage, while the South Africans who are unionized want to insist on the minimum wage and more pay increases.”

The last pronounced wave of xenophobic attacks was around July 2019, when a Deputy Director-General of the Chartered Insurance Institute of Nigeria, Mrs. Elizabeth Ndubuisi, was murdered in her hotel room in South Africa, among other killings and violence.