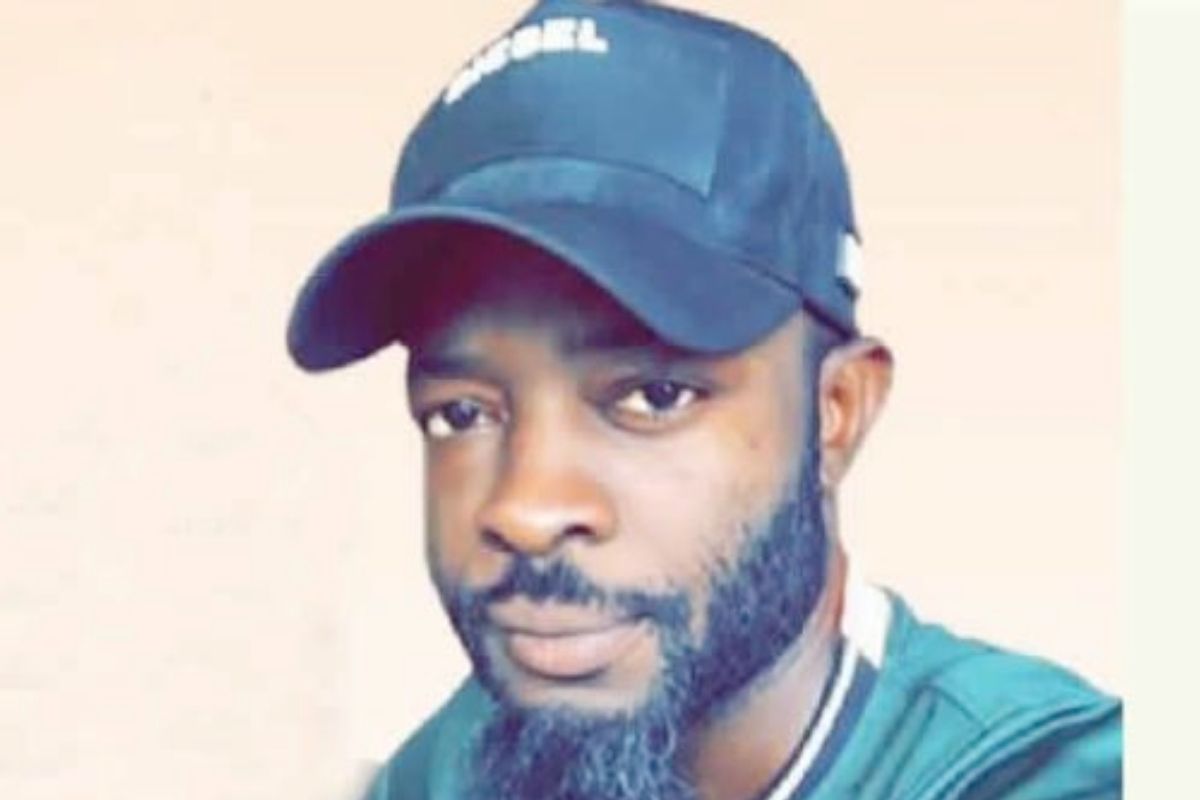 In the fresh interview with OLUFEMI OLANIYI, he spoke about his younger brother’s final moments.

Read excerpts from the interview.

What do you do at Iwo Road Shopping Complex?

I manage the shopping complex. My mum, Alhaja Salimot Azeez, built it and I also have a shop there where I sell phones.

Some hoodlums attacked the shopping complex and allegedly killed your younger brother in the mayhem. Where exactly were you when this happened?

We have been facing problems from commercial drivers at that place. They always park in front of the shopping complex to drop and pick passengers and their activities negatively affect our businesses there. We have made many attempts to stop this but they are very stubborn and aggressive and that was why we tried as much as possible to avoid them, but their activities affect us.

What led to the crisis on that day?

Was there an attack?

There was nothing like that. He felt embarrassed. But from his tone, I knew he was up to something sinister but what his plan was, I didn’t know. But I think less than five minutes after that, he returned with his colleagues. They came with canes and as they approached us, my colleagues ran but I stood there. I wanted to see whether they came for dialogue or just to talk about the matter. But as they got closer, two of them, including the park manager that left in annoyance, rushed towards me. He pointed his cane at me saying, “That’s him. That’s him!” They raised their canes and started flogging me. At that point, I decided to move back because I knew they could harm me if I stood there to argue with them because they were many.  I moved into the shopping complex for safety. But they started hurling stones, bottles, and other objects at us, destroying things.

They were about 20 and the stones and other objects they threw destroyed goods inside the traders’ shops. So, in anger, the traders threw those objects back at them in order to push them back. But as they did the traders, the park managers kept multiplying in number and coming with greater force. They eventually overpowered our people and started looting shops at that point. They attacked anybody they saw, including customers, young and old but we managed to close the gate to the complex to prevent more hoodlums from rushing in. Fortunately for us, Operation Burst (a joint security patrol team) came and stopped them. I think they were around that axis. They shot in the air to stop the park managers from further looting the shops.

Did the hoodlums leave?

They went back a bit but I saw them from afar. We later assessed our shops and found that the destruction was huge. My car windscreen was broken, shops were broken, phones and accessories were also looted. We invited more security men and Amotekun too came. That gave us the confidence that the worst was over.

Were arrests made on the spot?

The military managed to arrest two of the people that attacked us. They were arrested with weapons. The weapons were like a saw and the other side of it was like a blade. It was two-in-one. They kept them in their patrol van and they (hoodlums) no longer attacked us again as of that time. So, we were discussing our losses and injuries with the soldiers  when we suddenly saw vehicles coming from underneath the bridge with their headlamps on. They that were many and their occupants and their members on foot were chanting war songs. Some of them came from the Lagos Garage direction. We saw a man in a pair of jeans or something like that and a hat on. The man I am talking about is someone close to the Oyo State Government (name withheld). He saw the soldiers with us and started waving his hands as though indicating we should calm down. We believed with his hand gesture, he was coming for peace. But as they got closer, the thugs started running towards us with cutlasses, broken bottles, stones, and all kinds of weapons. We all ran for our lives. Immediately they got to the front of the shopping complex, they started the mayhem. I managed to hide beside the shopping complex.

Were they after you?

At that point, I did not know whether I was the target but shortly after that, I knew they were after me. They were asking where I was. One of them saw me and raised the alarm. I started running and I looked back and saw my brother (Rahmon) who shouted, ‘They have wounded me. They have stabbed me. I have been stabbed!” At that moment, I just told him to cover the place he was stabbed, that we would get to hospital. I was assisting him and trying to escape so he could be taken to hospital. But I looked in front of me and saw about eight of the hoodlums with cutlasses rushing towards me. I had to run away hoping I would return to take him to hospital. I scaled the fence and ran into the building beside the complex and that was how I escaped.

Did anybody rescue Rahmon?

I had hoped they (hoodlums) would leave the place soon so I could return to pick him but they did not. At that point, my brother was still alive. But by the time I got back to where he was, he was dead. We still managed to take him to hospital but on getting there, the doctors certified him dead. I was lost, I became numb. I could not cry but I saw many people wailing and shouting. People became angry that a human being could be killed just like that, so they took his corpse to the governor’s office but I could not stop them. Emotions were high.

How was the news of his death broken to his wife in the United States?

My brother was a very quiet person. He was not outspoken like me but he loved to dress well. Immediately he was killed, the news of his death went viral and that was how his wife got to know via social media.

How did she take the news?

She is shattered, angry, and very bitter. She is bereaved and she is a widow and her children have suddenly become fatherless. It is crazy. Rahmon was not sick. He was not involved in an accident. He was just killed for nothing.

How did your mum hear about it?

I never told my mum; everybody just heard it. The news of his killing was everywhere. She heard it and we have been trying to console her while also mourning. Unfortunately, my brother was sent to his early grave this way. He was killed by people put in an important position in the state.

But did the man you are accusing of being behind the killing of your brother participated in the mayhem?

He did 100 per cent. In fact, he masterminded it. He gave them the order to kill, maim and destroy. They even went to the extent of trying to burn the shopping complex, but for the security agents that were around. They did not want to leave any trace of evidence. They forgot this is the age of technology. People captured some of the scenes with their phones and the videos are now everywhere. I think it will be impossible for him to exonerate himself. To say he was not there is a lie that has been punctured already. It will be ridiculous for him to say he was not there.

But the man said he there for peace. Was he not?

He was not there for peace. The videos showed that. His boys know me very well. His right-hand man knows me very well; I helped him financially many times. The man knows me; he has my mobile number and he could have told his boss to allow him to meet me to find out what happened. But they chose violence and that is the only thing they know. This thing could have been avoided. It was not a big issue but I saw the way they violently ended my brother’s life. This is sad and it shows how much we value life in this country. The next day, I started hearing about an attack by cultists. My brother was never a cultist and this can be verified by people who knew him. There are over a thousand people ready to testify against that claim. They should forget that one (claim that he was a cultist). None of them thought there could be a backlash like this. The killing was just senseless. They probably wanted to use that case to send signals to people that if anybody trampled on them, they would do the same to them. But we did not trample on them. They oppressed us; they came to attack us where we legitimately do our business and killed my brother, and destroyed our sources of livelihood.

How did it affect shop owners in the complex?

Many shop owners had their businesses grounded. Their shops were destroyed and looted. They (hoodlums) could have bid for the building or asked us to sell it to him so they could use it as a motor park. But killing my brother is cruel and I don’t know the joy they derived from that. My brother was attacked and stabbed to death. He was standing alone and was moving back when the crowd started coming. He was a very quiet person.

It is just unfortunate we have this kind of violent people who killed him in our midst and believe they can do anything and get away with it without consequences. We don’t have any connection in high places. My advice to Nigerians is they should have plan B because there is no security in this country. People value human lives in other climes but here, human beings can be killed for the fun of it. If you look at it, the police station at Testing Ground is not a police post. There are many officers and men there; it would not take the police more than two minutes to get to the shopping complex.

But you said Operation Burst and Amotekun agents were there. What did they do?

The man (who led the attack) apparently told them they did not come to attack them (security agents) and told them to stay idle and watch them attack us. They (the soldiers and the Amotekun corps) stood there idle and didn’t do anything. These were people (security agents) that were standing with us before they (hoodlums) came to attack us and didn’t protect us. One of the soldiers who stood with us before the mayhem was unleashed later told me when I saw him that they begged him (close ally of the Oyo State Government that attacked us) to persuade his men not to attack us, but the soldier told me he and his colleagues were told to stay out of it because they did not come to attack the security agents but the shopping complex and the occupants. I believe it was a premeditated attack. I don’t know whether we will get justice.

The police paraded three suspects in connection with the mayhem. Are you aware?

Yes, I read the story but they need to arrest more. Those arrested are the scapegoats. The mastermind ought to be in detention now, but they may not arrest him.

Information from The Newzandar was used in this piece.