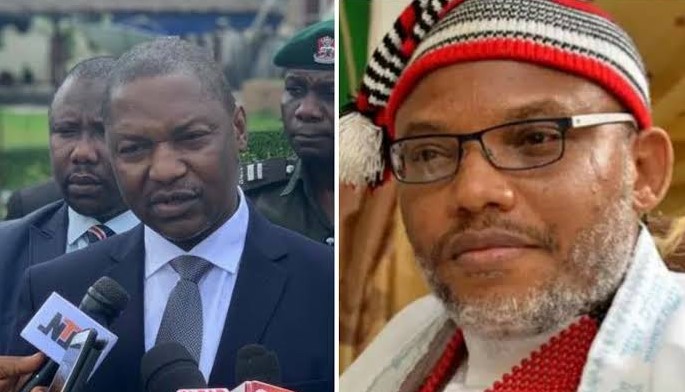 Attorney General of the Federation and Minister of Justice, Abubakar Malami, has met with the legal team of Ohanaeze Ndigbo over leader of the Indigenous People of Biafra, Nnamdi Kanu.

The group visited the AGF to seek approval for it to fully witness and monitor the trial proceedings of the IPOB leader.

In a statement released on Monday by Malami’s Special Assistant on media and public relations, Dr Jibrin Umar Gwandu, the AGF said government has nothing to hide in the trial and as such will allow the law to take its course in the trial that will commence on July 16.

The statement read in part; “The Attorney General of the Federation welcomed the formation of Legal team by Ohanaeze Ndigbo to monitor the proceedings at the trial of the self-acclaimed IPOB leader, Nnamdi Kanu which is in line with the doctrine of the right of fair hearing rooted in Section 36 of the Constitution of the Federal Republic of Nigeria

“Inherent in the position of the Ohanaeze Ndigbo on the matter was the demonstration of their recognition of belonging to Nigeria and succumbing to the rule of law while maintaining their stance that they were not averse to the trial of Nnamdi Kanu.

“In a similar vein, the group showed a mature departure from the mindset of the proscribed Indigenous People of Biafra when Ohanaeze said they “do not support the use of any form of violence” while channeling concerns and presenting demands.

“By urging the youths to be law-abiding and sheath their sword as well as asking them to try to obtain voter’s card to enable them contribute to national development, the position of Ohanaeze becomes glaringly constitutional and commendable.

“Let it be made abundantly clear that President Muhammadu Buhari-led Federal Government respects the rule of law and does not advocate for the breach of law.

“Hence, with or without the so-called monitoring group, justice will be adequately served to Nnamdi Kanu in compliance with the enshrined provisions of the law.

“It is hoped that the unnecessary legal monitoring group will come with open-mind and be guided by nothing but the rule of law in the process so as to convey the judgment of the Court as may eventually be delivered to their people in various languages and dialects of the members of the Ohanaeze Ndigbo communities and the entire Nigerians.”