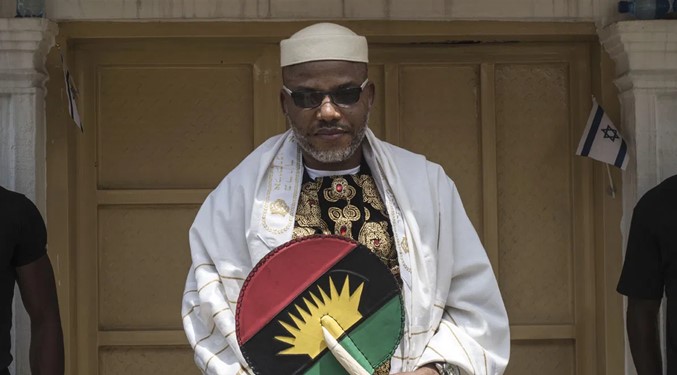 Leader of the Indigenous People of Biafra (IPOB), Nnamdi Kanu has been declared wanted by a northern group.

The group known as Northern Consensus Movement (NCM), declared Kanu wanted over the killings and destruction of properties owned by northerners in the South- East.

President of the group, Dr. Auwal Abdullahi, during a press conference on Thursday also placed a N100 million bounty on Kanu.

He said the IPOB leader should be captured and brought to them for onward handing over to security agents.

Abdullahi accused Kanu of using IPOB and the Eastern Security Network, ESN, to attack Northerners residing in the Southeast.

He said; “We are declaring Nnamdi Kanu, the leader of IPOB and ESN wanted for the killings, destructions of properties of Northerners residing and undertaking their lawful businesses in the South-Eastern part of Nigeria.

“We call on all countries of the world to respect our sovereignty as a nation. Nnamdi Kanu, the leader of IPOB, is the man and brain behind the killings and destruction of properties belonging to innocent northerners residing in South-Eastern Nigeria carrying out their legitimate businesses, using his proscribed terrorist organization, IPOB/ESN.

“Northern Consensus Movement with these organizations has placed a bounty of N100 million as an offer to anyone who can produce Nnamdi Kanu alive, hale and hearty to us for onward delivery to security agencies for continuous prosecution.”

The group urged the United States, and German governments to repatriate Kanu back to Nigeria.