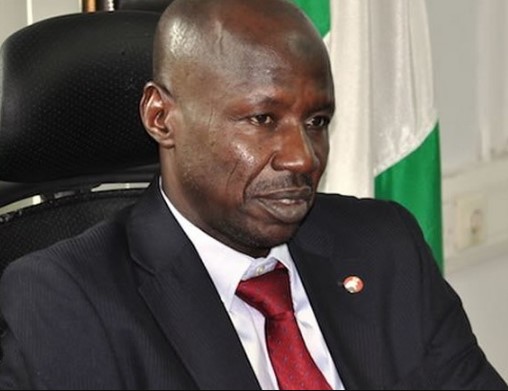 Shehu Sani reacted to the news of the rejection of Magu and intimated that the promotion in Nigeria’s police structure is determined by the PSC, and that President Buhari had no influence in the promotion.

Shehu said: “President Buhari, or any Nigerian President for that matter, is not responsible for promotions in the Police. That is the business of the Police Service Commission, PSC.

“In the case of the gentleman in question, who is currently under investigation, common sense dictates that his eligibility will be determined by that outcome. The PSC could have given you the correct position on this if there was an effort to reach them,”

Meanwhile, Kola Ologbondiyan who belongs to the PDP said that the fresh directive to promote Magu is a “direct slap on the sensibilities of Nigerians”.

The statement released by Ologbondiyan reads in part

“The party describes as outrageous and a direct slap on the sensibilities of Nigerians that the Buhari administration is reportedly planning to promote Magu to Assistant Inspector General of Police, despite being indicted in the alleged stealing of billions of naira recovered by the EFCC as well as cases of abuse of office in the commission by the Justice Ayo Salami Presidential investigation panel,” the statement reads.

It is indeed ludicrous, though true to its proclivity to cover corruption, that the Buhari Presidency, instead of allowing the law to take its course, is rather rewarding corruption by reportedly planning to promote an individual indicted for treasury looting and compromising of high-profile corruption cases for pecuniary gains.

Our party invites Nigerians to note how the Buhari administration has failed to take disciplinary action against Magu, as recommended by the Salami panel, but seeks to reward him with a promotion in spite of the report by the Attorney General of the Federation, Abubakar Malami, which nailed him for alleged diversion of recovered funds and fraudulent sale of assets seized by the EFCC.