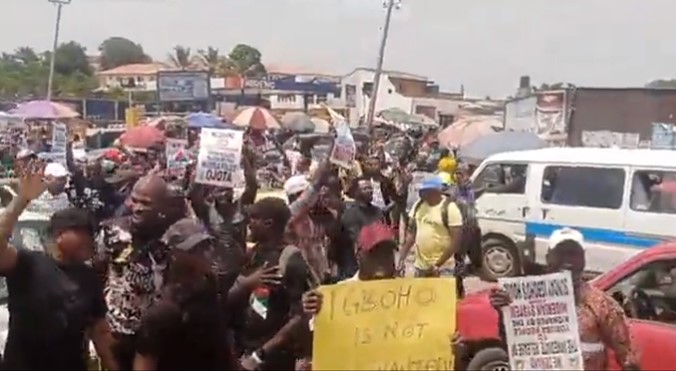 Several agitators of Yoruba Nation have gathered at the Soka residence of Yoruba rights activist, Sunday Igboho for a protest.

This follows the raid last Thursday by operatives of the Department of State Services (DSS) on Igboho’s residence at Soka, Ibadan, Oyo State.

The secret police had confirmed a joint team of security operatives raided the freedom fighter’s residence based on an intelligence report.

In a live video by BBC Pidgin on Wednesday, the supporters were seen gathered in front of Igboho’s house getting ready for the protest.

Also, Igboho’s spokesperson Olayomi Koiki, in a live video on Wednesday, stated the Pro-Yoruba Nation protesters will gather at Soka, Ibadan for the protest.

He said: “By Wednesday morning in Ibadan from Soka, Yoruba Nation agitators are to assemble at Ibadan for a protest as regards the recent development that has to do with Chief Sunday Igboho and other agitators

“The protest will head out from Soka. There will be a protest. Rally is what we have been doing, this time around we are doing a protest.”

A leader of the protesting youths addressed the gathering before they took off.

He said they would march to the palace of the Olubadan of Ibadanland, Oba Saliu Adetunji; and from there proceed to the Government House, amongst other places.

“We want them to bring the killers of Adogan and Alfa to book.

“The government must pay the N500m damages as requested by Igboho’s lawyer for the destruction of his house and property during the invasion.

“We want the Obas to make this happen within seven days,” he said.