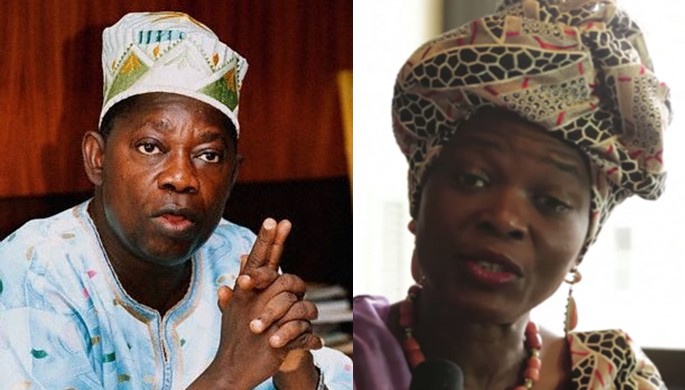 Zainab Duke-Abiola, one of the wives of Chief Moshood Kashimawo Olawale (MKO) Abiola, has narrated how the iconic late politician, was ambushed by armed robbers on his way to Ibadan, Oyo state.

Speaking to Newzandar News, Zainab said the armed robbers started shouting ‘MKO, is our man, Man of the people’ on sighting the winner of the June 12, 1993 presidential election.

She added that one of the gunmen later became a governor while two others were elected into the House of Representatives.

She said; “Abiola was unique and different, that’s why people miss him. There was a day we were going to visit the Olubadan of Ibadan. We were with some Americans, the Americans are still alive, I was newly married to him. Very newly married, just few months into our marriage. And we were going to the palace, on the way, do you know right in front of us, we saw robbers robbing people. I just started praying and the Americans were shivering.

“But when Chief saw them, he said he was not turning back nor running away. He told the driver to keep driving towards them. On getting near them, they saw the Rolls Royce and they started shouting ‘MKO is our man o, Man of the people.’

“Do you know they kept their guns down? Do you know they laid down flat? I am telling you what you won’t hear from anyone else except the Americans and the driver. They started shouting ‘baba ooo, baba oooo, baba ooooo’, so Chief came out and gave them money. He told them they were nice young persons and shouldn’t be involved in crime. They told him if they were two or three of him in the country, they wouldn’t be involved in crime. They told their victims to go, some of the victims told Chief they didn’t have transport means, so Chief gave the robbers and victims money.

“The Americans were surprised as well, I too was happy. Chief told them to go back to school and come to his house anytime they needed money. One of those people became the governor of a Yoruba state, he is alive, about two or so became House of Representatives’ members. Why are they not repeating this story, were they not fans at that point?”