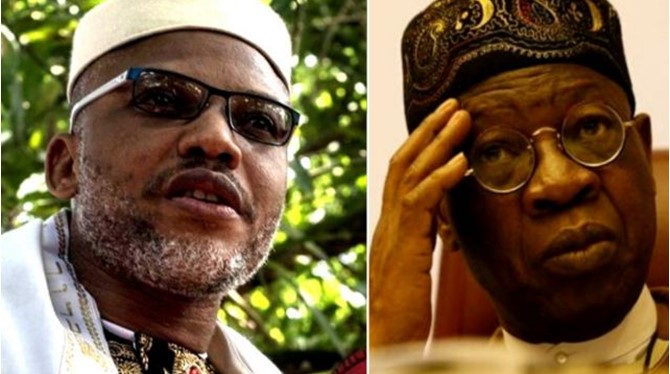 The Federal Government has said that Twitter rejected its demand to delete the account of the leader of Indigenous People of Biafra (IPOB), Nnamdi Kanu.

Minister of Information and Culture, Lai Mohammed made this known on Tuesday, when he featured on a Radio Nigeria call-in programme.

He said it was unfair to conclude that Twitter was suspended in the country because President Muhammadu Buhari’s message was deleted.

Mohammed accused the microblogging site of consistently offering its platform to promote agenda that were inimical to the corporate existence of Nigeria.

He said; “Twitter has become a platform of choice for a particular separatist promoter.

“The promoter consistently used the platform to direct his loyalists to kill Nigerian soldiers and policemen, run-down INEC offices and destroy all symbols of Nigeria’s sovereignty.

“Every attempt to persuade Twitter to deny its platform to this separatist leader was not taken serious.’’

Recall that Mohammed had alleged that Twitter and its founder Jack Dorsey have made several attempts to destabilise the country.

He disclosed few days ago that the social networking service refused to take down offensive tweets of leader of the Indigenous People of Biafra, Nnamdi Kanu, describing Nigeria as a zoo.

“Before its suspension, we made several pleas to them to remove the tweets where Nigeria is described as a zoo where all of us are described as monkeys.’‘ he said.