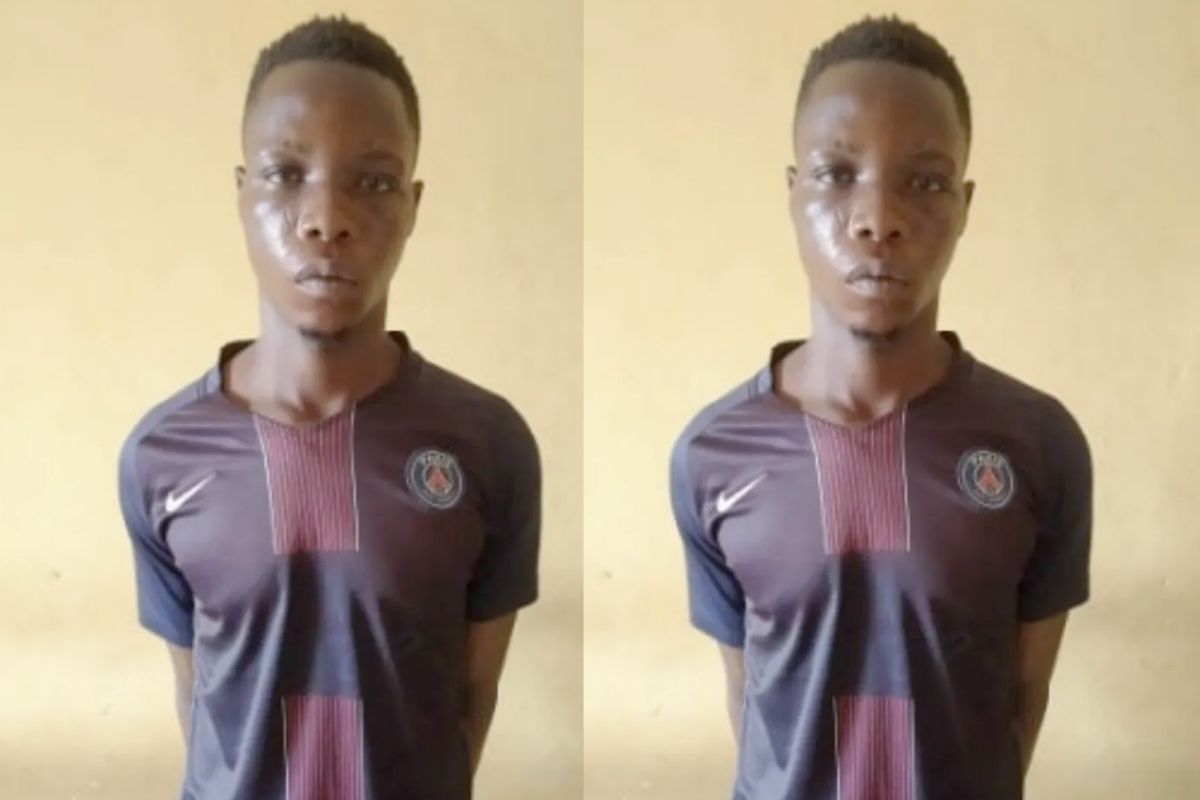 Nigerian man, Opeyemi Adeola Ganiyu, who murdered his mother-in-law in Ogun State has given reasons as to why he took her life.

The 28 year old man was held accountable for stabbing the deceased to death after an argument evolved into a fight.

The Spokesperson of the Osun Police, Abimbola Oyeyemi mentioned that the men of the Police Command acted on reports received from Odunayo Matthew who lamented that Ganiny has murdered his mother-in-law. In a report filed by Matthew, he mentioned that Adeola who is the husband to the daughter of the deceased has been unleashing beatings on his wife at the slightest provocation.

He said that the deceased went to see Adeola on the day of the incident to threaten him to avoid beating her daughter. When Adeola saw the deceased in his home, he beat her up before stabbing her in the ribs with a knife.

“The deceased was rushed to a hospital for treatment, but she gave up the ghost in the process. Having heard that the victim had died, the suspect escaped. He was later tracked down to Ikorodu in Lagos where he was eventually apprehended.

Preliminary investigation revealed that the suspect is a member of a notorious cult group in the area. He was also one of those who led hoodlums to burn down the Atan Ota Police Division and killed the Divisional Crime Officer during the ENDSARS protest.”

It was a mistake

Adeola told the Saturday Sun from the State Criminal Investigative Department (SCID), where he is reportedly held, that he mistakenly stabbed his mother-in-law.

His words: “I am a well-known welder at Atan Ota area of the state. Tope is my live-in lover and mother to my 8-month-old son. I have already visited his family with my people and assured her family that I would come and complete the process of getting married to her. I call her my wife because I had plans to complete the process.

“On April 28, 2022, she told me that she wanted to go and visit her mother who was very sick. I allowed her go with our son and she promised to return by noon the next day.

“The next day, I waited till evening and when she did not return, I decided to visit them, because I thought her mother’s illness might be getting worse.

On getting close to the house, I met one of her uncles and he asked me about the work that I travelled to another town to do. I told him that I had been at home. He claimed that it was my wife that said so. I became suspicious and walked faster to the house.

“On getting to their compound, I saw my wife flirting with one man who visited us some time ago with the excuse that he was owing my wife some money. I attacked the man and he ran away.

“To my greatest surprise, instead of my mother in-law to caution his daughter, he accused me of neglecting my responsibility.

“She boldly told me that she was the one that gave her permission to start dating another man. I was angry because my wife is still Bosom feeding our son. I told her to allow my baby to enjoy her mother’s Bosom  milk before she would hand my wife over to another man. I was so bitter and went back home. I waited for two days and she did not return home. I decided to go and take my son. I took my son and handed him over to my sister.

“When I returned to my house, I met my wife, her three sisters and her mother trying to break down my door. They said that they came to carry my wife’s property, that they were no longer interested in the marriage. I entered the room with them just to make sure that they did not take away any of my things. They started fighting me with every object within their reach, including the plastic chair. They were five of them attacking me and I knew that the only way to scare them was to get a knife.

I picked a knife in the room and tried to scare them. Unfortunately, it pierced the stomach of my mother in-law,”

According to Adeola, there was no other option but to run away since people were already gathering at his place. “I was scared that I would be beaten to death. I ran away while I monitored what was going on. They took her to the hospital but unfortunately, she died on the third day. I knew that I will be jailed for life if I was arrested, so I decided to run to Ikorodu where my father lives.

“But on the day that I arrived, my father took me back to Ogun State and handed me over to the police.”

Adeola blamed the deceased for his predicament. “She was the one who forced me to marry her daughter only to start arranging different men for her. I am a hard-working father of two. I do provide for my family with the little I make through hard work. I cannot afford to buy her flashy wears or expensive phones. This is why her mother was never satisfied. I never planned to kill her; I was only defending myself from those women. I simply took the nearest weapon to scare them so that they would not kill me. I am sorry and I know that no matter how I beg, it will not bring back the dead. It was a mistake. I love my wife Tope and will still marry her if I ever come out of this problem,” he stated.