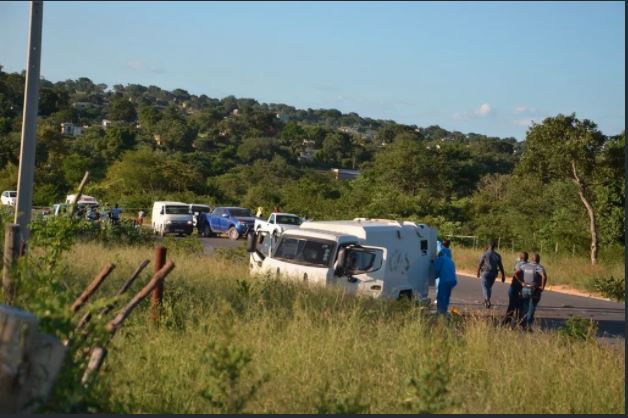 Two armed robbers in possession of AK 47 dies during a failed attack on a bullion van. They died after being run over by a bullion van vehicle in Oakley Trust outside Mkhuhlu near Bushbuckridge, Mpumalanga, on Sunday

Road users and bystanders who witness the scene told the Daily Suns that the G4S truck was on its way to Thulamahashe after it had just collected cash from the nearby Build It hardware store in Mkhuhlu.

“But as the G4S truck drove past the nearby Victor Driving School in Oakley, it came across the robbers who were waiting on the road. The robbers immediately started firing at the security backup team with AK-47s. We had to duck and dive from flying bullets hailed by the gang. The blue Toyota Cressida they were using collided with the backup van and a crossfire started between the guards and the gang. The taxi was shaking from the AK-47 shots,” said one of the taxi drivers.

“The cash truck made a sudden U-turn when it heard heavy gunshots. But it came across a silver Mercedes-Benz with another criminal gang inside. The cash van tried to hit the Mercedes with their truck but was unsuccessful. Two of the robbers tried to shoot at the guards. But the cash van driver ran over the two robbers and killed them on the spot. Realizing they were in trouble, the other gang hijacked an Audi and fled the scene,” said a villager.

Colonel Brenda Muridili confirmed a security vehicle was travelling towards Thulamahashe when a bakkie and sedan appeared.

“The bakkie rammed the escort vehicle off the road, injuring the driver who was taken to hospital. A shoot-out between the suspects and the guards ensued which led to two suspects being killed on the scene. The police recovered an AK47 rifle on the scene with several magazines. Cash was not taken. Other suspects fled the scene,” said Muridili.