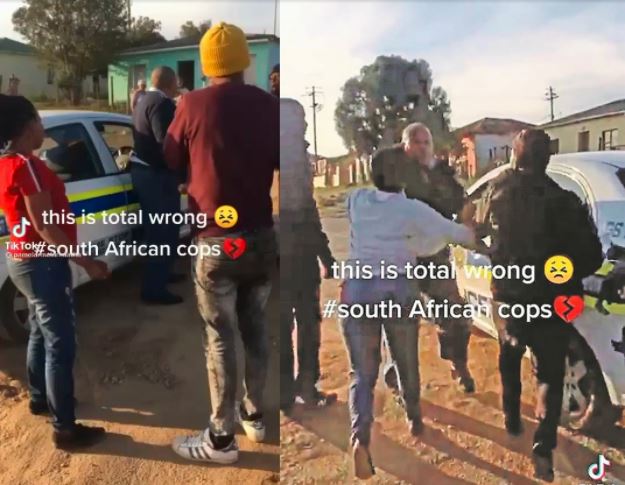 The video shows cops being pounced on by a group of young people in Makhanda.

Brigadier Tembinkosi Kinana told the media that the incident happened near a tavern in Fingo Village on Monday, 14 June.

Kinana said police were on patrol when they saw a group of people playing loud music and blocking the road.

When the police asked the people to move out of the way, they were attacked.

In the video, a mob can be seen rushing towards the Police officers who managed to turn their car around and escape without sustaining any serious injuries.

“The youths were carrying and drinking liquor from open bottles in public. When police stopped to warn them against blocking the road and drinking in public, they were met with insults and physical attacks,” said Kinana.

“The unruly members of the community further obstructed the police from carrying out their duty to ensure peace and order in the area by even attacking them while they were returning to their vehicle.”

Provincial police commissioner Lieutenant-General Liziwe Ntshinga said the incident was a direct attack on the government and rule of law.

“We’re going to deal decisively with disruptive criminal elements who consistently launch an onslaught on innocent officers,” she said.

“Our members will continue fighting crime undeterred and nobody will stop them from carrying out this mandate.”

According to the Daily Suns, One man and one woman, aged 28 and 35, were arrested and taken to the Grahamstown Police Station.

They were charged with assault and malicious damage to property.