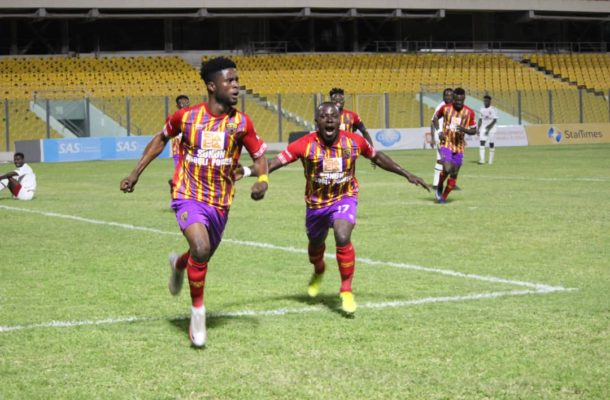 Accra Hearts of Oak ended their 12-year wait for a major silver ware after drawing 1-1 against Liberty Professionals on Sunday to win the Premier League. Hearts needed to beat Liberty to clinch the title regardless of the result in Bechem, however, Asante Kotoko’s defeat meant there was no way back for the Porcupine Warriors.

Daniel Barnieh scored in the first half but Liberty Professionals cancelled the lead in the 87th minute through Kwame Paul. The result ended Hearts of Oak’s long wait for a Premier League title their 21st in history.  The Phobians last won the League title in the 2008/09 season.

Bechem United scored two goals in the first half to beat Asante Kotoko 2-1 at the Fosu Gyeabuor Park. Steven Owusu was the hero of the day as his two strikes gave Bechem United all the spoils against the Porcupine Warriors.

Owusu scored an early lead, after capitalising on Kotoko’s shaky start in the 5th minute – but Samuel Sarfo Taylor levelled matters on 32 minutes. The Hunters took another lead after they were awarded a penalty which was converted by Owusu to secure victory.

Tetteh Nortey opened the scoring as early as the fourth minute after latching on to a corner kick. The home side ended the first half with a 1-0 cushion.

Simms Kwame added the second goal three minutes into the second after converting from the spot. Abass Ganiu scored the third in the 89th minute before Prince Opoku Agyemang climbed off the bench to score the consolation for the Tarkwa side.

WAFA pulled a major upset on Sunday after beating Karela United 2-0 at the Cape Coast stadium. Augustine Boakye drew the first blood in the second minute of the match to tilt things in their favour. Lawrence Agyekum added the second before the break to record their third win on the road.

Relegated Inter Allies lost 4-2 to Aduana FC at the theatre of Dreams, Dawu. Benjamin Tweneboah netted the opener for the visitors inside five minutes before Emmanuel Osei Baffuor, Brabby Kofigo and Farouk Adams got on target for the former League champions. Andy Okpe and Sunday Kalu were on the scorers’ sheet for Inter Allies.

Elmina Sharks put up a splendid second half display to down Legon Cities 2-0 at the Nduom stadium.

After holding for a scoreless first half, Sharks came back stronger in the second half to win 2-0. Benjamin Boateng scored first in the 79th minute to bring the host into the lead. James Bissue put the game beyond the visitors in the 92nd minute when he scored to complete the win.

In Berekum – Kofi Owusu scored in stoppage time to power Berekum Chelsea to a 2-1 win against Great Olympics. Benjamin Abaidoo scored the opening goal in the 44th minute but Olympics fetched the equalizer in the 87th minute through Gladson Awako. Kofi Owusu then slotted home the winner in injury time to give the Bibires the three points.

Early on – King Faisal defeated Ebusua Dwarfs 2-0 at the Ohene Ameyaw Park on Sunday morning. Kwadwo Frimpong netted the first goal in the 52nd minute – before Zubeiru Ibrahim added the second right on the hour mark.