Democratic mayoral hopeful Andrew Yang has benefited throughout the primary race from the help of an influential YouTuber and podcaster without properly disclosing the partnership, front-running rival Eric Adams is set to allege to the city’s Campaign Finance Board.

Adams’ campaign will file a formal complaint against Yang to the CFB on Tuesday in a last-minute effort to have Yang investigated over the tireless work of online personality Matthew Skidmore on his behalf, The Post has learned.

Skidmore, a 21-year-old Yang superfan, has touted Yang’s politics since his longshot presidential campaign in 2020, and kept up the advocacy into Yang’s New York City mayoral run — despite living in Maryland, according to the CFB complaint, a copy of which was obtained by The Post.

“This is a presence on social media that only ‘professional influencers’ possess,” wrote Katie Moore, Adams’ campaign manager, in the six-page CFB complaint. “The shows,
tweets, and media are all devoted to promoting Andrew Yang, and Andrew Yang’s political endeavors.

“Skidmore regularly creates graphics, short videos, edits news clips and films and photographs Yang events, and appears at opponents’ public events,” the complaint continued. “Additionally, he proceeds to disseminate this originally created content digitally, to thousands of people at a time via his various channels, and presents this content to members of the media as professionals would do.”

The sheer volume and quality of Skidmore’s work on behalf of Yang suggests “significant apparent coordination and lack of disclosure between these two entities,” Moore alleged in the complaint. “This failure to disclose and report suggest a scheme to evade the contribution and spending limitations of the New York City Campaign Finance Act.”

Moore specifically cited an advisory opinion in which the CFB ruled that while most independent efforts by third parties to boost a given candidate are permitted, coordinated campaigns — whether compensated or not — must be reported and counted toward contribution limits.

Despite the volume of work Skidmore has put in to boost Yang’s chance, the only reported tie to his campaign is $136 in campaign contributions, according to the complaint.

Asked about the complaint, Yang campaign spokesman Chris Coffey said that the move — which comes with early voting already underway — was defensive on Adams’ part.

“Eric Adams will do anything to try and distract from his record and past statements,” he said. “It’s not going to work.”

An Adams spokesperson, in turn, accused Yang of intentionally trying to game the city’s campaign finance rules to gain an edge.

“Andrew Yang is continually violating the law to cheat in this election — and this time he’s doing it to mislead voters with false attacks,” the spokesperson said, referring to Skidmore’s recent attempts to amplify months-old remarks in which Adams said some remoting learning classes should feature 300 to 400 students.

Adams has since clarified his remark, reported Sunday by Politico, to say that he misspoke and meant to say 30 to 40 students.

Skidmore did not respond to a request for comment.

The eleventh-hour complaint is just the latest salvo between Adams — the Brooklyn Borough President and a former NYPD cop — and businessman-turned-pol Yang in what has been a no-holds-barred primary race.

Most recently, Adams accused the Yang campaign of “trailing” him for months in an effort to prove that he secretly lives in New Jersey, an allegation that Yang’s team called “paranoid.”

Adams — who has acknowledged co-owning a home in the Garden State while maintaining that his primary residence is in Brooklyn — later said that Yang’s suggestion that he can’t possibly own two homes has a “hint of racism.” 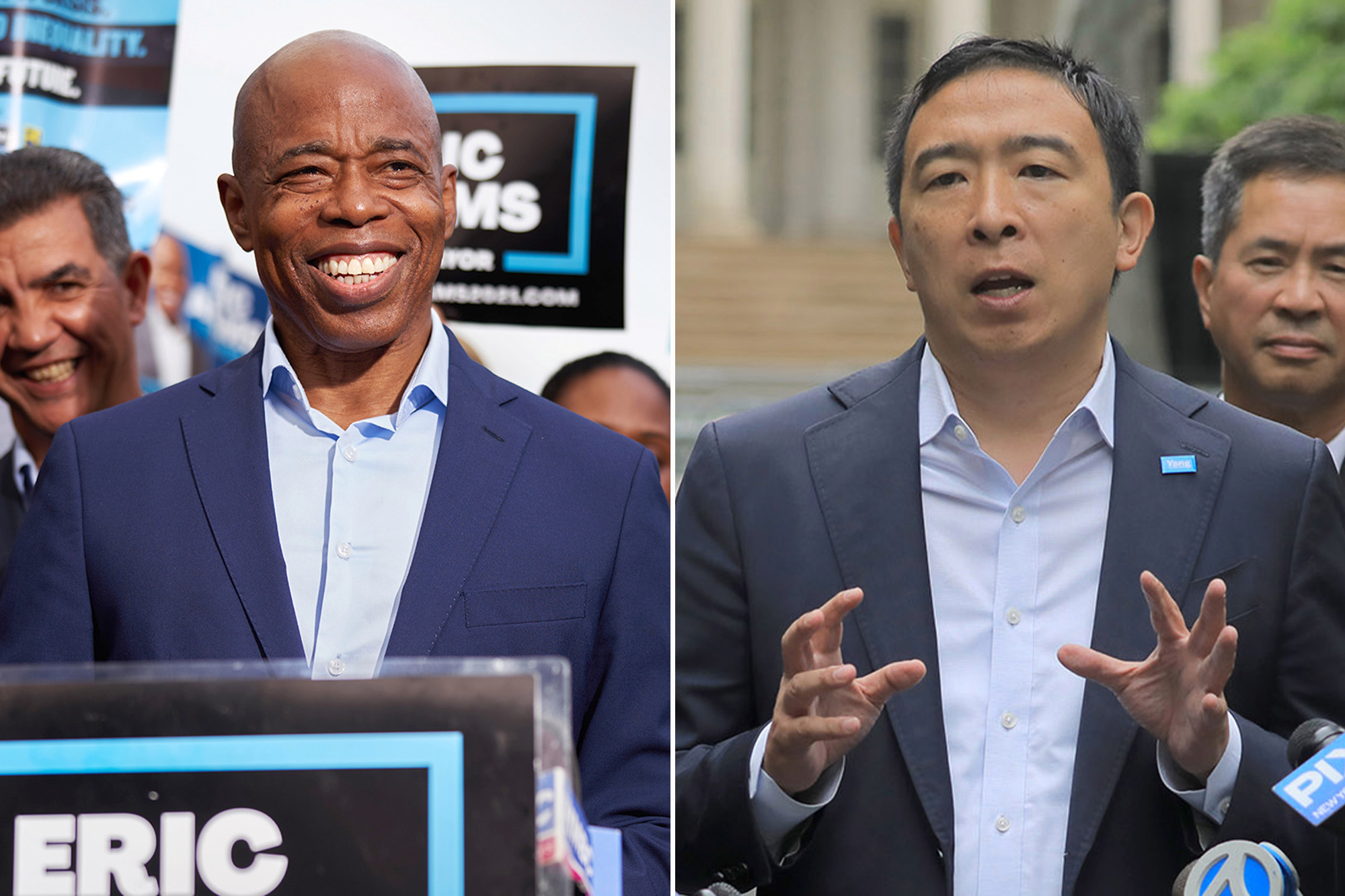