BEIJING – In Heyuejia, a care home in western Beijing, new residents announced their advanced ages and illustrious former careers to applause from a crowded hall, before tucking into a candle-decorated cake and dancing.

Spacious rooms, nutritious food, and activities from calligraphy to art therapy are on offer to residents – largely retired professionals – for around $1,541.54 a month. Prices scale with the level of care needed.

Such facilities play a key role in other aging countries such as Japan. But experts say China’s relative lack of wealth and a dearth of qualified carers has hamstrung the sector, keeping the burden of care on families.

China had 264 million citizens aged 60 and older in 2020, a number set to increase rapidly just as the working population shrinks.

HNA Investment Group opened Heyuejia in 2016 as part of efforts to “respond to China’s aging crisis,” according to a company statement.

Helped by government subsidies, more than 40,000 registered homes have been built in recent decades. But many are too expensive or too low quality to replace family care, experts say.

Some facilities have long waiting lists. But most are quite empty – average occupancy rates are as low as 50%, official data suggests, far lower than the 80%-90% rates seen in Japan or the UK.

Wang Yiguang, 85, a retired scientist who moved into Heyuejia in 2018, likes the care home and can comfortably afford it.

“Here you have someone to help you at any time, and there’s a doctor to see if you need to go to the hospital,” Wang said.

One of her sons, living in the U.S., had resisted the move. He had seen Americans in care homes who seemed sluggish and irritable.

But her son came around when he saw how happy his parents were, said Wang, who sings in a Russian-language choir with other residents who studied in the Soviet Union.

Bei Wu, a professor at New York University who has researched aging in China since the 1980s, said high fees and poor staffing push away potential residents. China planned a decade ago to train 6 million caregivers by 2020. Just 300,000 were qualified by 2017, according to a report cited by state news agency Xinhua. The latest calls for 2 million to be trained by 2022.

Until recently almost all the elderly were looked after by family members, Wu said. But shrinking families, migration, and a decline in a sense of filial duty has led to the “erosion of the family support system,” she said.

Without more frontline staff and expanded community-based care, the pressures on families will mount, she said.

Yang Wei, an engineer from northern Hebei province, said that his grandfather, who is nearly 90, had wanted to try out a care home to reduce the stress on his family after a bad fall.

He moved into one that cost 4,000 yuan a month. But staff didn’t seem to care about residents’ well being, Yang said.

“The staff weren’t professional. And there weren’t enough,” Yang said. “Even if you spend more money… it is still difficult for the elderly to enjoy good care in nursing homes, and families can’t be completely at ease. So we took Grandpa home.”

Nie Guihua, 72, has been looking after her husband, Yang Shulin, for nearly two decades,

He had a stroke at 55, can no longer speak, and uses a wheelchair. Nie also helps care for her two grandchildren.

Nie and her husband each get 800 yuan a month from the state – about two-thirds the cost of a care home near where they live in a village outside Beijing.

Her son, Yang Xiaoli, who is divorced, drives buses for a living, and often only gets home late at night.

Nie, a former farmer, was fined for having her son under the one-child policy, a key contributor to China’s rapidly aging population that was relaxed in 2016.

Yang said even if they could afford such care, other pressures would make it impossible.

“If my mum and my dad were in a care home, who would look after the kids?” he said. (Reporting by Gabriel Crossley and Beijing newsroom. 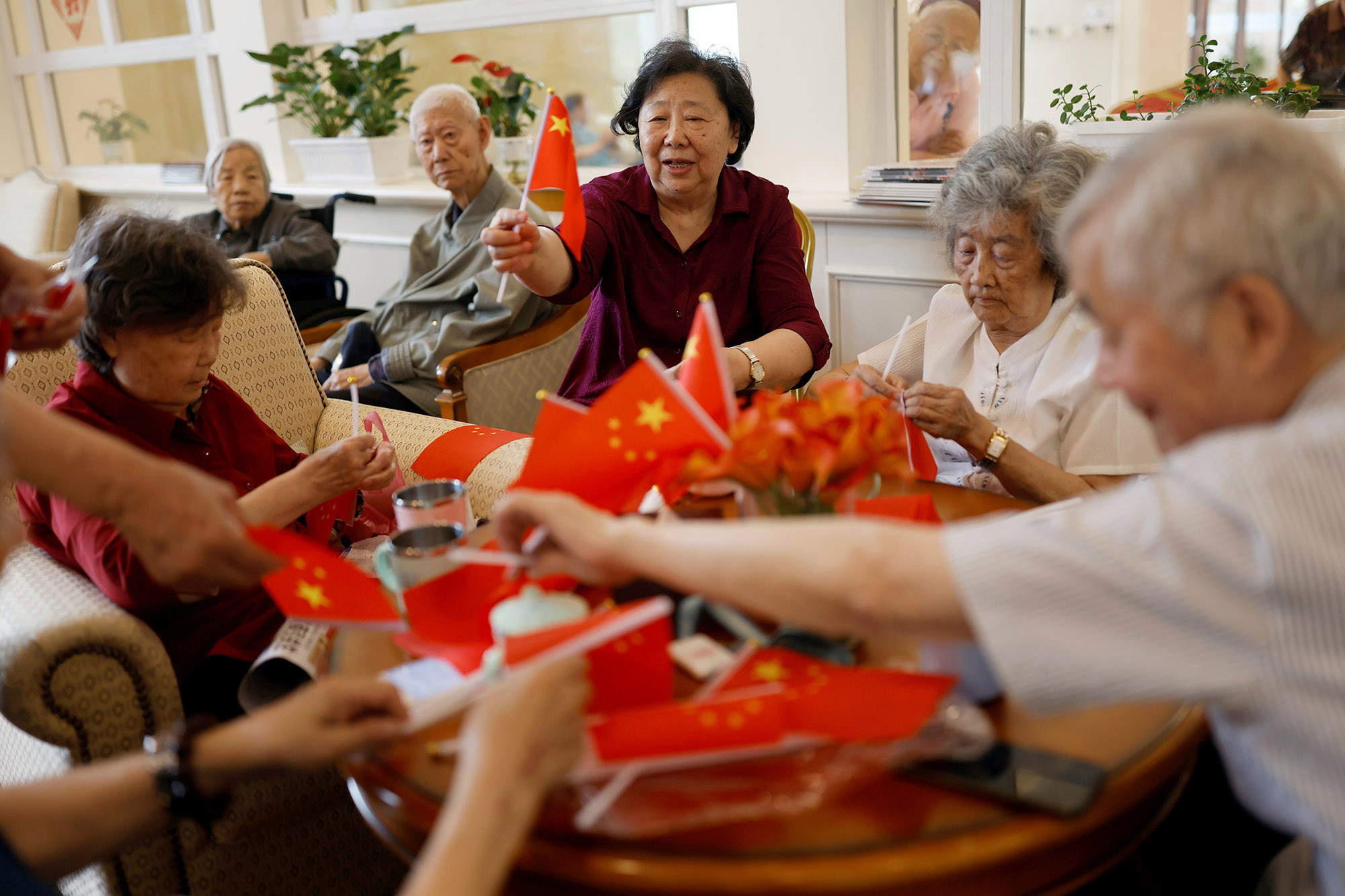