A crazed man suspected of being high on opioids reached through the window of an ambulance stopped in traffic to try to attack a paramedic — causing the frightened EMT to jump out of the vehicle and bolt away, shocking video shows.

The two-minute clip, shot late Thursday in the Bronx, shows a man frantically bashing on the side of the ambulance and trying to open the locked door.

He then reaches through a side window to try to unlock the door, prompting the unidentified paramedic to escape out the back and make a run for it, the clip shows.

The ambulance, which was headed to Jacobi Medical Center in Morris Park, had previously picked up the man on a call for an unconscious male.

But he became violent with paramedics and jumped out of the vehicle — before he was then caught on camera returning, the vice president of the FDNY Uniformed EMS Officers union told The Post.

“He woke up in the back and became combative,” Anthony Almojera said. “He actually punched and spat at an EMT in the back of the ambulance who was treating him.”

The extent of the paramedic’s injuries was unclear, Almojera said. Cops were called regarding the incident, but the man, who has not been identified, was not arrested, he added.

Sources told The Post the man had been treated with Narcan inside the ambulance, which is typically used to treat opioid overdoses.

“If that was the case, he was definitely under the influence,” one source said.

An NYPD spokeswoman said police were looking into the incident.

Almojera, meanwhile, said the episode shows what city paramedics have to face on a daily basis while on the job.

“Every day,” he said when asked how often paramedics deal with combative patients. “Over 10 percent of the calls coming in are for psychiatric patients, but this came over as a call of an unconscious male.”

The footage clearly shows the “dangerous” conditions EMS staff face, according to Almojera, who accused Mayor Bill DeBlasio of not properly recognizing their efforts with the same pay and benefits as other 911-related city agencies.

“The city is still reeling from a pandemic, protests, shooting every day, stabbings,” the union vice president continued. “As this city starts to burn, EMS will be the one that’s going to save it and the mayor right now is sitting on the sidelines playing the fiddle as it burns.”

Almojera, an FDNY employee of 18 years who was raised in New York, said the rate of shootings, stabbings and other related mayhem citywide is reminiscent of the early 1990s, during the crack epidemic.

The paramedic who ran away in the clip was able to circle back to the ambulance, which then drove off after he got inside, according to the footage. 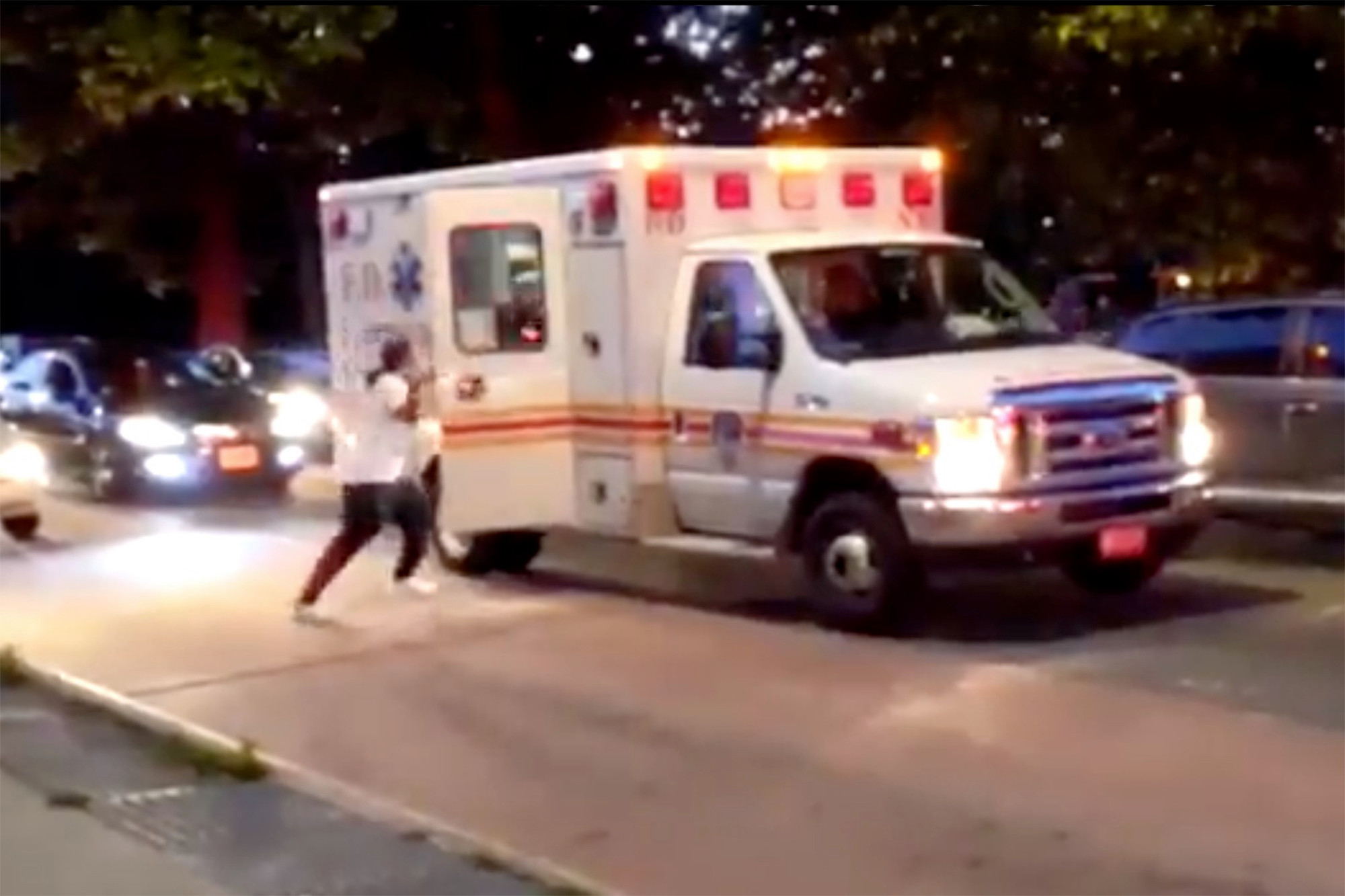