Talk about dumping the old ball and chain.

After being handcuffed together for a staggering 123 days — using the bathroom in front of one another and taking turns showering mere inches apart — troubled Ukrainian lovers Alexandr Kudlay and Viktoria Pustovitova have taken their shackles off and are moving on from one another.

“Hooray,” shouted Pustovitova, 29, in late May as giant cutters slashed through the steel chains that bound her to Kudlay, 33, for three months, according to the Mirror.

“I am finally free,” she added.

Pustovitova, an eyelash technician from the eastern city of Kharkiv, proposed she and Kudlay, a car salesman, handcuffed themselves together on Valentine’s Day as a last-ditch effort to save their rocky romance.

“I decided it will be an interesting experience for me,” Pustovitova told Reuters at the onset of her and Kudlay’s love lockdown in February.

The pair documented their inescapable experiment on Instagram for their more than 7,800 followers.

“It will bring into my life new bright emotions which I did not experience before,” she said.

But instead of adding a ray of sunshine to their cloudy coupledom, the ill-fated trail rained down hellfire on the relationship.

“As soon as we find one plus in a situation, immediately there are two minuses,” Kudlay explained to their followers in an Instagram video posted during the experiment.

“Vika wants to get back to the rhythm of her earlier life, she misses what she used to love to do,” he added, noting that the difficulties of being linked together had been “snowballing.”

“She doesn’t respond well to my suggestions to keep doing what she likes to do alongside me.”

In addition to taking care of their personal hygiene in front of each another, Pustovitova and Kudlay went grocery shopping together, took side-by-side cigarette breaks and even accompanied one another to work.

But Pustovitova ultimately had to quit her job as a beautician because clients weren’t comfortable with Kudlay standing over them as she manicured their eyelashes.

Their constant companionship and lack of personal space sparked four-hour arguments, bitterness and emotional neglect between the two.

“We stayed together all day, I did not receive any attention from Alexandr because we were constantly together,” Pustovitova told Reuters at the conclusion of the experience. “He did not tell me: ‘I miss you’, while I would like to hear that.”

Kudlay said the experiment revealed to him that he and Pustovitova were not, “like-minded people.”

“We are not on the same wavelength,” he insisted. “We are totally different.”

The handcuffs — which left unsightly rub burns and bruises on their wrists — were finally removed on May 19.

Pustovitova and Kudlay’s endurance broke the Ukrainian and world record for the most time a couple has ever spent chained together.

A handcuff cutting ceremony, supervised by Ukrainian records chief Vitaly Zorin, was held in front of the country’s Unity monument in Kiyv, and broadcast on national television.

Zorin, according to The Mirror, plans to introduce himself to the newly single Pustovitova.

But immediately after being freed from the restraints and announcing her break-up with Kudlay on social media, Pustovitova made it clear she’s happy flying solo for a while.

The last photo shared to their Instagram account showed the soured sweethearts standing apart and staring at the ground.

Pustovitova and Kudlay are now leading separate lives in distant regions of Ukraine.

However, they plan to jointly sell the handcuffs in an online auction and donate part of the money to charity, per Reuters.

And as a word of caution, Pustovitova advised paramours around the world against putting their love to the test by fastening themselves together.

“I think it will be a good lesson for us, for other Ukrainian couples and couples abroad not to repeat what we have done.” 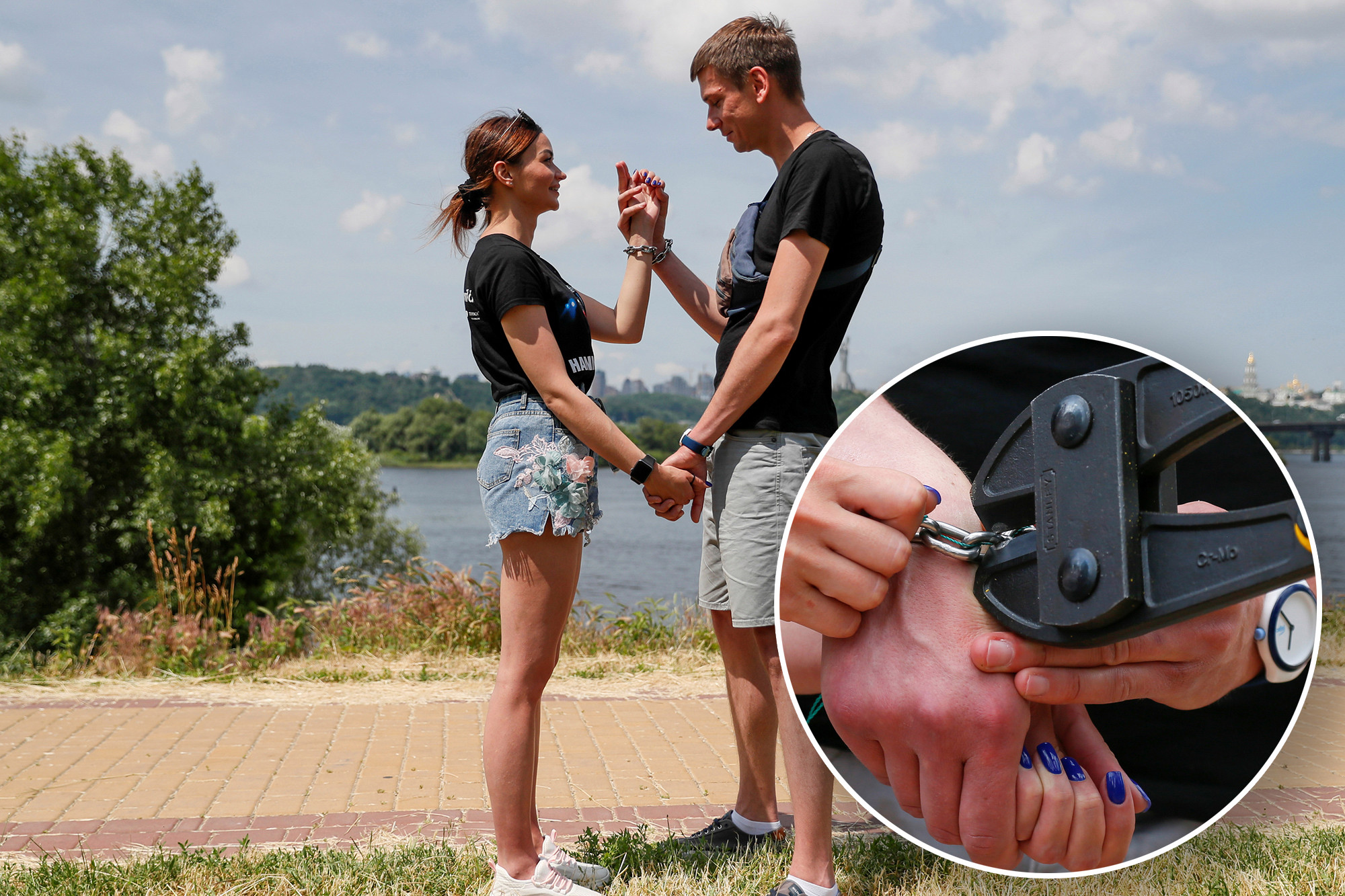