It’s way past a day late — and every dollar short will be made up by tax hikes.

Lawmakers were gearing up Wednesday to finally adopt New York’s overdue budget for 2023-2022, which aims to spend a record $212 billion with the help of a federal bailout and new taxes on high earners and big businesses.

“This budget is certainly the most robust, most impactful, most important budget that we have done in this state, I believe in modern history,” Gov. Andrew Cuomo said during an hourlong, virtual news conference from Albany.

“It’s not just about the numbers. It’s an action plan for the future.”

Cuomo treated the spending plan, which was due April 1, as a fait accompli, even though he hadn’t yet signed it and it was still awaiting approval by the state Assembly when he spoke Wednesday morning.

The Senate passed the plan hours earlier, around 3:30 a.m., but the Assembly — which had only approved six of the 10 budget bills — didn’t gavel into session until 1 p.m. to debate and vote on the remaining four.

That process was expected to continue late into the night, if not longer.

Following are key details from the budget package:

Those increases, which wouldn’t expire until 2027, would make the combined city and state income tax burden on Big Apple residents the highest in the nation.

The corporate franchise tax on businesses that make more than $5 million a year in profits would also rise from 6.5 percent to 7.25 percent until 2024.

Cuomo tried to counter critics who warn the tax hikes will lead big earners and companies to flee New York by claiming that there will be an “overall net” reduction if federal lawmakers restore the deduction for state and local taxes, known as SALT.

“After SALT, the taxes will be lower than before,” he said.

“They have to repeal SALT, which is what they said they would do.”

But EJ McMahon of the conservative Empire Center think tank in Albany said, “There is absolutely no assurance that the SALT cap will be repealed, unless federal rates are jacked up higher than [President ] Biden already has proposed.”

Under a plan to allow legal, app-based sports betting, the state Gaming Commission would license a minimum of two companies able to provide at least four mobile platforms for gamblers to place wagers.

A request for applications would be issued by July 1, with responses due in 30 days and the contracts awarded within five months after that.

Priority would be given to the state’s Native American tribes, and obtaining a license would require a $25 million upfront payment to the state, with revenue sharing agreements yet to be determined, but likely to involve splits of either 50-50 or 55-45.

Officials hope the apps will be up and running by the fall, in time for the NFL season, with state revenue for the 2023-2023 fiscal year projected at $99 million.

In addition, the state will solicit information from companies interested in operating a downstate casino, which could begin operations in 2023.

One of the most controversial budget provisions — which opened up a bitter rift in the Democratic Party — involves a plan to give up to $15,600 each in unemployment benefits to illegal immigrants who were ineligible for federal COVID-19 stimulus checks.

The payments would amount to a maximum of about $300 a week, with taxes deducted upfront, and would cover wages lost between March 27, 2023, and April 1, 2023, due to the pandemic.

Eligibility would be limited to those whose income during the 12 months prior to the bill taking effect was less than $26,208 and who can prove they are still able to work.

In addition, the amount of benefits would be determined based on a point system tied to the ability to provide official documents that prove residency in New York and proof of past work.

Those deemed ineligible for the maximum payments could still qualify for a lesser payout of just $3,200.

Jacobs called the inflammatory criticism “unjustified, uncalled for, unfair and unbecoming of any public official elected in a democratic system that survives on the decency of civil public discourse.”

Jacobs also singled out Sen. Gustavo Rivera (D-The Bronx) and Sen. Jabari Brisport (D-Brooklyn) for what he called their “unfair public rebuke of other well-intentioned, honest and hardworking Democratic legislators who happen to disagree with them.”

State aid to schools would increase by $29.6 billion, which is $3.7 billion — or 14 percent — more than Cuomo included in his January budget proposal.

The aid includes $1.4 billion targeted for needy school districts, but Cuomo and the legislature refused to pass a law to raise the state cap on charter schools, despite demand from parents eager to enroll their children in the privately run alternatives to traditional public schools.

The cap is set at 460 statewide, with 290 slots set aside for New York City, which has already hit that limit.

Lawmakers with ties to the anti-charter teachers union even blocked Cuomo’s modest proposal to reissue unused, “zombie” licenses for failed charter schools that are no longer open, although they did restore $47 million in aid to New York City to provide space for charter schools.

“We should be opening doors and giving all of our kids a chance to succeed and recover from the pandemic equitably. Raising the cap is a progressive goal. It is an urgent goal. We will keep advocating for it until it gets done.”

The biggest budget provision for infrastructure improvements involves authorizing the sale of $1.3 billion in bonds to expand and improve the tracks in Manhattan’s Penn Station — money that Cuomo initially wanted to spend buying up nearby properties for redevelopment.

State funding to upgrade roadways would increase by $100 million in additional spending on the Consolidated Local Street and Highway Improvement Program, known as CHIPS, and $65 million would be restored to another program to fix highways and roads damaged by extreme weather events.

Another $50 million would be added to a road-repair program known as PAVE-NY.

Local boards of election would get $20 million in additional capital funding to improve their headquarters and $5.5 million would go to improve communications between emergency response agencies.

Similar to President Biden’s proposed $2 trillion infrastructure program, state lawmakers are lumping plenty of non-construction-related spending under the rubric of infrastructure, including $7.5 million for outpatient, drug-addiction treatment, $3.75 million for jail-based treatment and $2.5 million for court-appointed lawyers.

Relief for renters and homeowners

The budget earmarks $3 billion in combined state and federal funding to keep New Yorkers in their homes.

A $2.3 billion “Emergency Rental Assistance Program” would provide tenants with money for up to 12 months in past due rent and utility payments, as well as three months of prospective rent.

Anyone who doesn’t qualify would be able to apply for money from a $100 million “hardship fund.”

In addition, $575 million in federal money would be earmarked to help homeowners avoid foreclosure, including $60 million over three years to provide legal assistance.

Another $100 million would be set aside for local governments to help homeless people pay for housing or help people unable pay their rent avoid eviction.

Aid to businesses and the arts

Small businesses are set to receive a total of $1 billion worth of aid, including $800 million in grants to cover the costs of their payrolls, rent or mortgage payments, and local property or school taxes.

That money could also go toward paying for insurance, utilities, personal protective equipment, and heating, cooling and ventilation upgrades needed to comply with COVID-19 safety protocols.

Nonprofit arts institutions would get $40 million to help them reopen and “for the conversion of outdoor venue spaces.”

The budget would also allocate $43.1 million to the New York State Council of the Arts operating budget and another $1 million for “arts stabilization grants.”

Musical and theatrical productions would be eligible for a total of $100 million in tax credits, with the New York City Musical and Theatrical Production Tax Credit also expanded to $100 million over two years.

Another $20 million would also be earmarked for construction costs to improve various arts and cultural facilities.

A law that Cuomo signed as part of the budget-adoption process has already made it legal for anyone 21 and older to possess up to three ounces of pot and light up in public anywhere that tobacco smoking is allowed.

Plans call for a new Office of Cannabis Management to issue licenses to growers, distributors and retailers but sales aren’t expected for at least a year.

Residents will also eventually be allowed to grow their own — with up to 12 plants per household — and accumulate stashes of up five pounds, which is enough for more than 3,400 joints.

Officials project that the legal weed industry could create between 30,000 and 60,000 jobs and generate $350 million a year in new state revenues.

After funding the new state regulatory agency, that money would be split three ways, with 40 percent going to education, 40 percent to social and economic equity programs and 20 percent to drug treatment and public education programs. 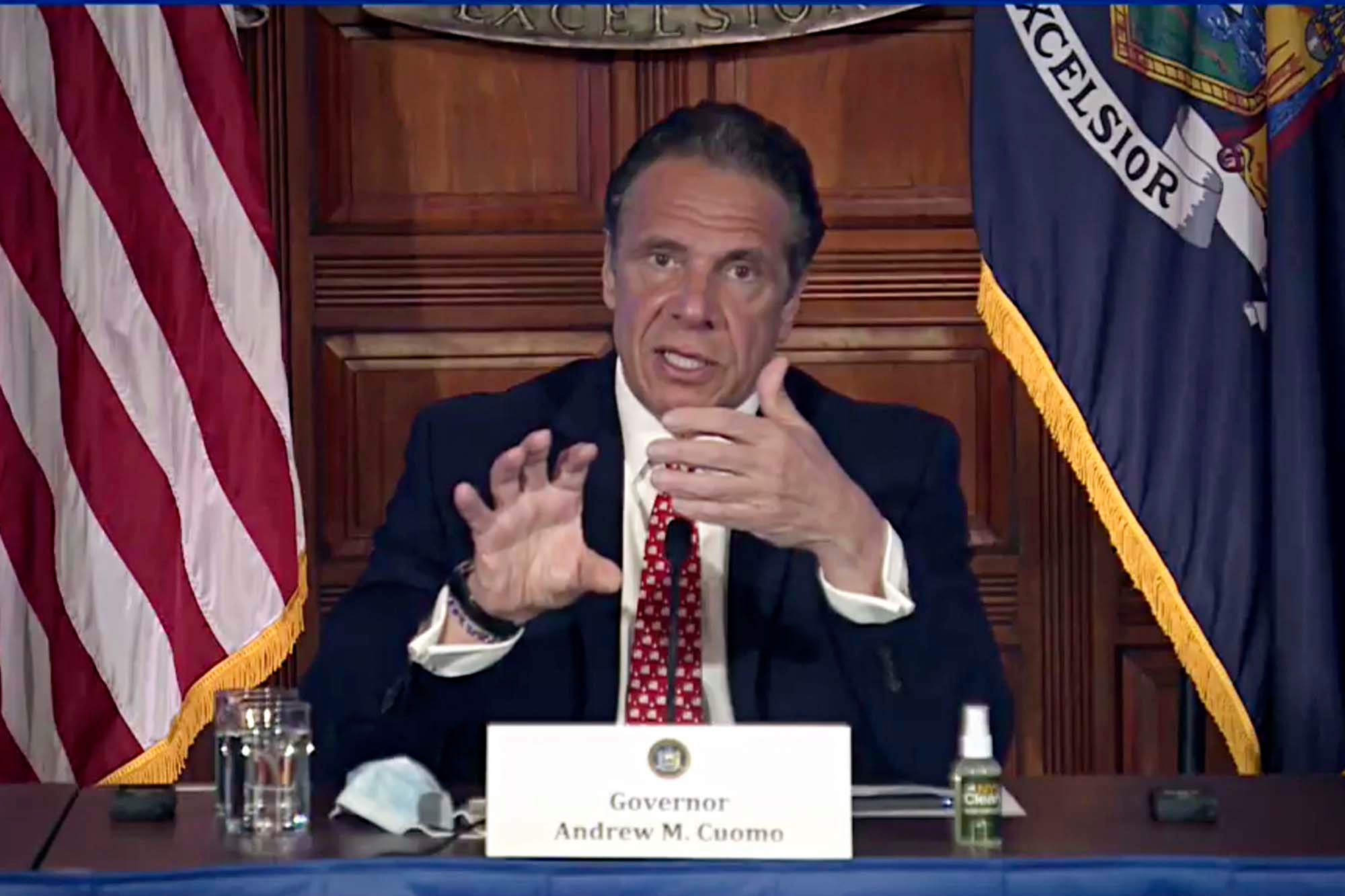