City correction officers are so desperate to escape their jobs in the Big Apple’s jails that hundreds have recently joined the NYPD — even amid violent anti-cop protests and the progressive “defund the police” movement, The Post has learned.

The newest class of 555 NYPD recruits that was sworn in during a ceremony Thursday at the Police Academy contained 42 former correction officers, a law-enforcement source familiar with the matter said.

One of them was Tyliek Dyches, 28, who joined the Department of Correction in June 2017 and worked on Rikers Island.

Dyches said he learned that he’d been accepted by the NYPD on June 28 while vacationing in Miami, and he immediately headed to Rikers to empty out his locker when his flight home landed July 5.

“My last day I worked before I went on vacation, I went into a triple [shift]. And I’m like, ‘Are you kidding me? My last day before vacation?’” he told The Post.

“So, I walked in there and I walked out with a big garbage bag! And I had my own personal parade going over the bridge!”

Dyches celebrated by posting an online video clip of himself driving past the infamous jail complex in his convertible, with a black plastic trash bag full of his belongings visible in the rear seat.

“I QUIT!!!!!!!!” a banner across the screen said, along with a raised-middle-finger emoji.

Dyches said that “about 15 to 20 people I worked with left corrections and are in the NYPD right now.”

“The bad part about working at Rikers — I’ll be honest with you — it’s not the inmates,” he said.

“It’s the administration. They’re not backing us up and officers are getting hurt.”

His remarks came one day after the correction officers union boycotted Mayor Bill de Blasio’s ticker-tape parade for the “Hometown Heroes” of the COVID-19 pandemic.

In a full-page ad published in Wednesday’s print edition of The Post, Correction Officers’ Benevolent Association President Benny Boscio Jr. accused the DOC of “gross mismanagement and sheer negligence” that he said led to more than 1,700 jailers getting infected — nine fatally.

A veteran correction officer told The Post, “This is the worst job in the world.”

“We come into work and we don’t know when we are going home. It is not uncommon to work three of four shifts in a row,” the source said.

“One officer works where there is supposed to be two, and that leads to a lot of unnecessary fights and injuries.”

Even inmate David Mordukhaev mocked the department’s dysfunction, leaving behind a note taunting guards for not checking his cell thoroughly enough before escaping the Vernon C. Bain Correctional Facility barge in The Bronx overnight Friday into Saturday.

The alleged burglar was later re-captured in Brooklyn.

The DOC’s long-standing issues — deemed “systemic and deep-seated,” and indicative of a “pervasive level of disorder and chaos” by a federal monitor in May — must be unbearable if guards are jumping ship to the NYPD, one Manhattan cop suggested.

“I can’t imagine how bad Rikers is, because morale in the NYPD is the lowest I have seen in almost 20 years,” said the source. “I couldn’t imagine quitting a job to come here.”

Correction officers are paid a slightly higher starting annual salary — $43,333 — than NYPD cops, who earn $42,500 their first year, according to information posted on the city’s website.

With overtime and other additional payments, including holiday pay and longevity pay, “police officers may potentially earn over $100,000 per year,” according to the city.

But correction officers earn $99,073 in salary and other payments — without overtime and “specialty pay.”

The 42 correction officers who entered the Police Academy on Thursday exceeded the 34 in the class of 450 recruits that was sworn in on April 21, a source said.

Last year, there were 119 correction officers in three graduating classes, and there were 129 in the four classes that graduated in 2019, the source said.

A DOC spokesperson did not immediately respond to a request for comment on Sunday. 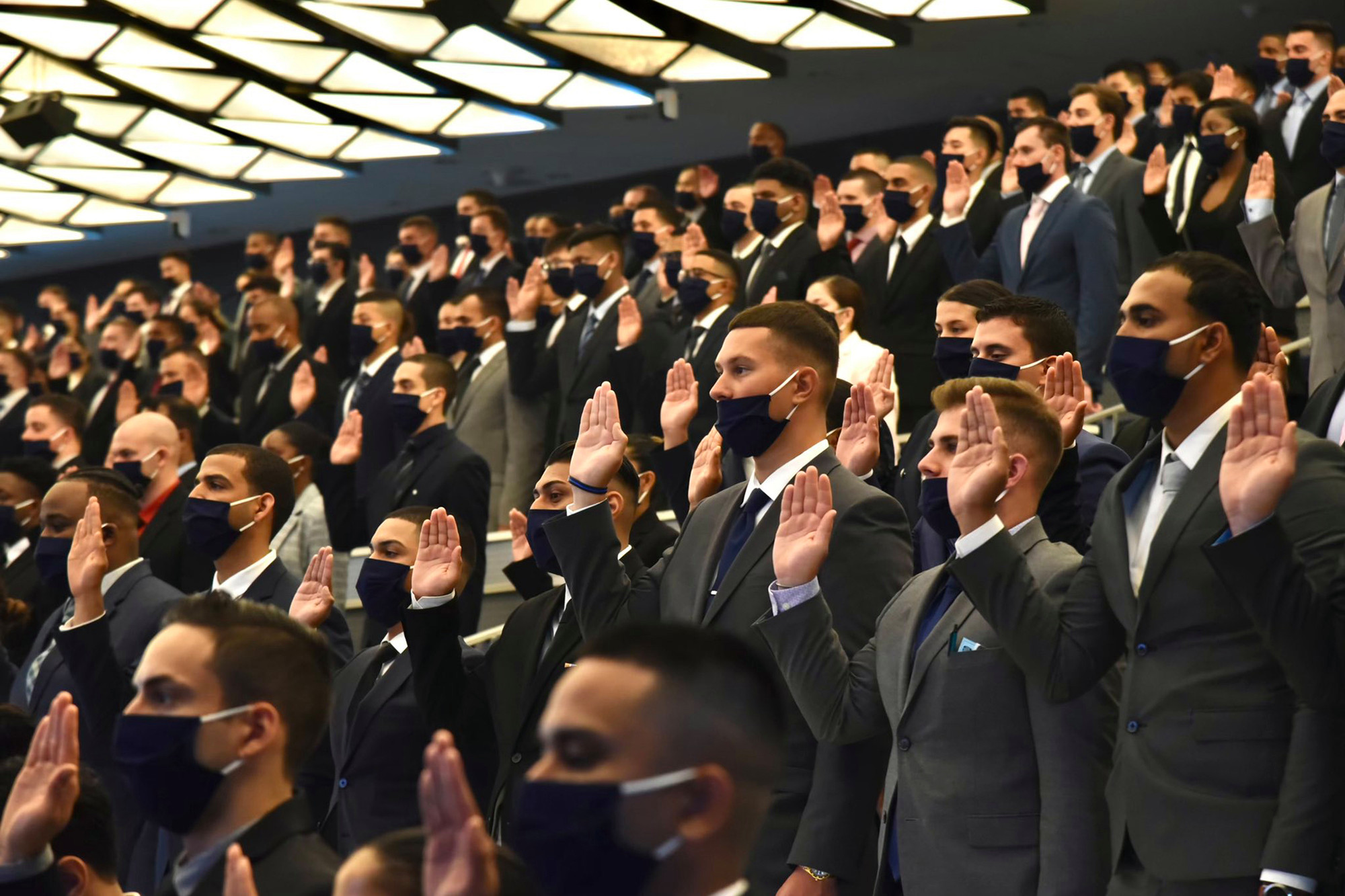