A “major gang war” between heavily armed crews that are fearless of the authorities has caused the Bronx to explode with violence — leaving a trail of bodies over the last five days that includes a 13-year-old boy and two other teens, law-enforcement sources told The Post on Monday.

“We can’t keep them in [jail], and they’re going after each other,’’ a high-ranking police source said, referring to juvenile suspects who end up back on the streets after being sent to family court instead of being prosecuted as adults.

A city prosecutor added, “They don’t go to jail, so they do robberies, get in fights and carry guns.

The first teen to die in the bloody gang-fueled stretch of borough violence was 19-year-old Tyquill Daugherty, who was shot in the head in front of his home in Crotona just before midnight Wednesday, sources and cops said.

Elliot — who just graduated from middle school  — was at the scene when Daugherty was shot, although he is not believed to have pulled the trigger, sources said.

The 13-year-old kid already had eight busts under his belt, including for robbery and assault — and had been locked up two times this year before being dumped back on the street, the high-ranking cop source said.

About eight and a half hours after Elliot’s slaying, revenge for his murder was taken on 16-year-old Ramon Gil-Medrano, who was fatally shot by two males on scooters a little over a mile away in Mount Hope, sources said.

Gil-Medrano, who was affiliated with the 800 YGz, or “Young Gunnaz,’’ gang, had been at the scene of the 13-year-old’s slaying, although it is not clear if he is the one who did the killing, sources said.

“There is a major gang war going on in The Bronx with three teenagers killed in less than a week,” a borough cop said. “Everybody is walking around with a gun because they are more afraid of getting shot than getting arrested.”

Gil-Medrano had previously been wounded in another shooting July 7, 2020 — a year to the date of Daugherty’s death last week, sources noted.

The 16-year-old was shot at the time by two guys on a scooter on Prospect Avenue, about two blocks from Daugherty’s murder.

Gil-Medrano had three open gun cases against him in family court when he was killed — all stemming from incidents in the past seven months.

“What a joke,’’ a police source said.

“Any other time, he’d have been sitting in Rikers Island,’’ the source said, suggesting the justice system has gone soft on prosecuting criminals. “It’s just ridiculous. It just shows you how bad it is.”

Another law-enforcement source added, “This is another instance of no consequences for repeat gun offenders.

“The system that purports to help these kids is actually acting as an incubator for future violence,” the source said. “Gil-Medrano gets caught with guns, goes to kid-glove Family Court, and he’s out here walking the streets. “The kid gloves ultimately allowed him to get murdered.”

The slayings come as The Bronx is getting hammered amid the city’s gun epidemic — with the borough racking up more than twice the number of shooting victims so far this year than for the same period in 2020.

Two of the recent teen gang slayings occurred in the 48th Precinct, which has seen a jump from 20 to 33 shooting victims.

Mourners of Elliot on Monday placed dozens of candles in front of a photo of the 13-year-old with angel wings on him outside the apartment building where he lived.

The candles spelled out “JR,’’ for his Jay Ripp street nickname, a 13-year-old pal said.

Two young males dressed in nearly all black with some blue — Crips colors — nodded at the scene when asked by The Post if they were part of his “crew.’’

They posted a fresh $100 bill on one of the candles, and when asked if they were worried someone might take it, one of them smirked and replied, “Nobody.’’

Two young females poured wax from some of the candles to spell  “EOS,’’ which one of them said stood for “Exterminate On Sight.’’

Several people tied blue bandanas to the wrought-iron fence next to the candles.

Elliot’s 13-year-old friend said his dead pal was the middle of three brothers.

“He was going to high school!’’ the friend said. “No more.

“His mom is not doing good right now. It’s sad.”

A neighbor added of local young toughs, “They know nothing happen if the cops get ’em!

“It’s catch and release. Why you think they at it so young?’’

A mother of nine children, including seven boys, said she knew Elliot through her kids and urged parents in the area to stand up and take charge.

“They need to be more aware of what their children is doing,’’ said the woman. “These kids is out here 2, 3 o’clock in the morning. No mothers is looking for them. No mothers is coming to check for them.

“At the end of the day, we, all the mothers, need to come out here and stand up with each other together, you understand, so our children can stop getting involved in all this negativity. 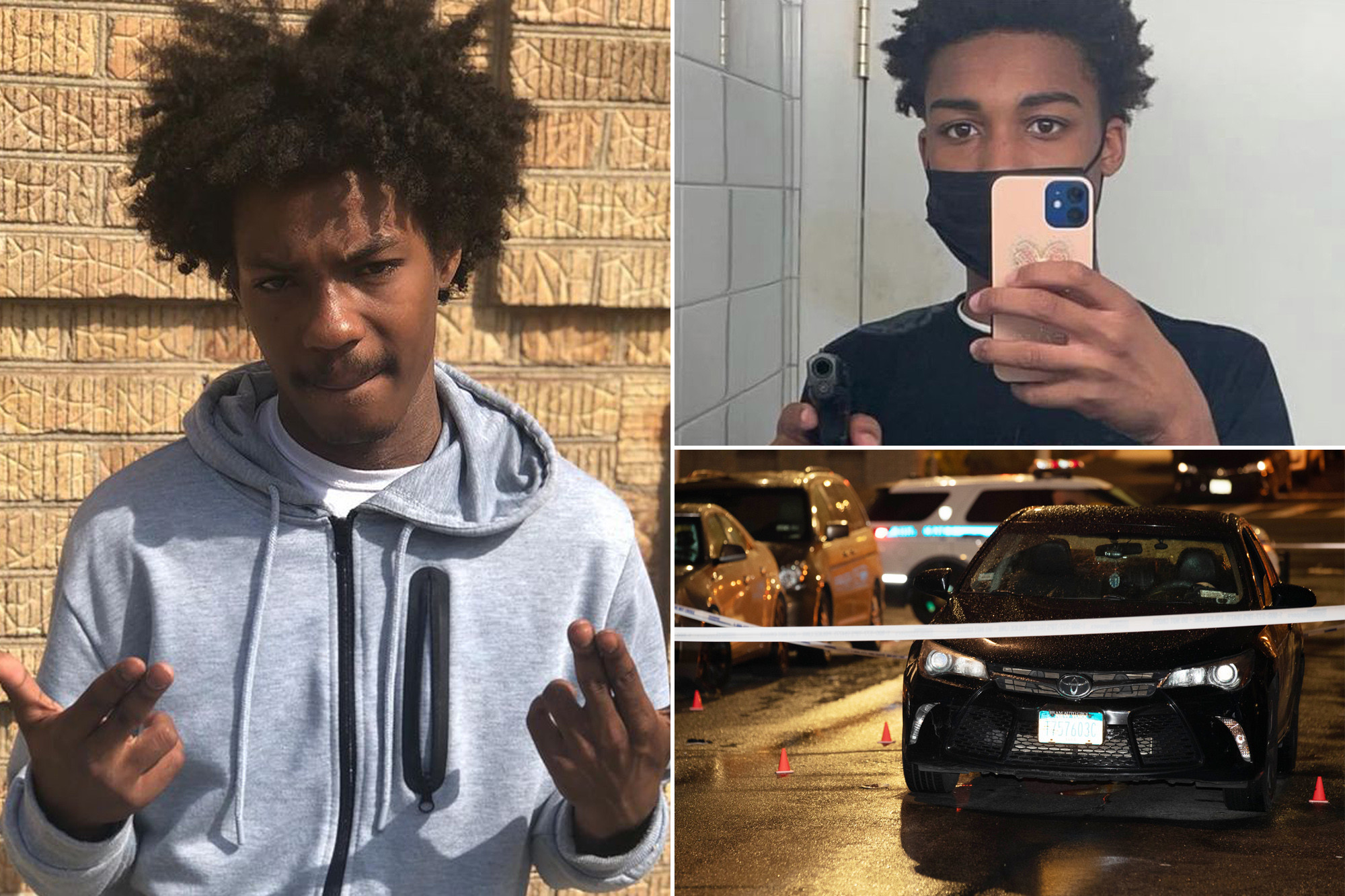