Flathead Lake Lodge, in Bigfork, Montana, near Whitefish, lies at the foothills of the Swan Mountains where the Swan River feeds into the northern edge of Flathead Lake.

In the mornings, guests ride horses across the 2,000-acre ranch to a fire pit breakfast before deciding whether to hike to waterfalls, explore the on-property elk preserve, kayak, swim or simply relax by a bonfire while looking at the snow-capped mountains in the distance.

Up until recently, the lodge, open annually from May to September, was little known outside its coven of loyal guests, some of whom have been coming for over 50 years. That is, until the months before this post-pandemic summer, when suddenly, it was the top of everyone’s hot list.

With COVID-19 still raging in Europe, places like St. Tropez or Cannes are no longer the places to go. Bill Gates recently spent some time at his home in the Yellowstone Club in Big Sky, Montana, licking his wounds from his divorce announcement from Melinda, and Justin Timberlake spent almost a year there with his wife Jessica Biel and their children — preferring the wide, open spaces to a cramped mansion in Los Angeles.

The coveted crown of the “It Spot” goes to Montana … if you can get in.

“Right now, we have an average of 20 families per week on the waitlist for 2021,” said Chase Averill, the general manager of Flathead Lake Lodge and who, along with his father Doug, owns and operates Flathead Lake Lodge. “For 2022, we already have 88 families on our waitlist, and we’ve started to receive inquiries for 2023.”

“Montana is where people want to be,” said Averill. “While we see significant traffic from the west coast and Midwest, during the last five years, we’ve seen more guests come to the ranch from New York, Texas and all along the East Coast, which aligns with the increase in airlift from direct flight markets.”

In the past few years, American Airlines and JetBlue started offering direct flights from New York City during the summer months — feeding the frenzy.

“This summer is wild in Montana,” Averill added. “All across the country, there’s a car rental shortage, and we’re no exception. We’re working to fill those voids for our guests, and we offer complimentary shuttle service to help eliminate that stressor. Plus, once guests arrive here, they don’t really want to leave.”

And some of them aren’t. While Flathead Lake Lodge and other hotels across the state are booked solid, during the pandemic many people opted to move there permanently, creating the “Zoom Town Boom” effect across the state.

All around the Lodge, along Montana Highway 35, from Kalispell to Whitefish, are what the locals call “COVID homes,” prefabricated track houses that line up along what used to be a timber farm — all of which were built last year and sold at around $550,000.

While this may be good for realtors, locals are shell-shocked at the price hikes due to what the Flathead Beacon called the “COVID migration” from states like New York. “(The housing crisis) is happening all over Montana,” one Whitefish local told The Post. “No one who is from here can actually afford to live here anymore.”

According to Realtor.com, just before the pandemic in December 2019, the average home price in Whitefish, a town of 7,700 people just south of Glacier National Park, was $369,450. A year and a half later, that has almost doubled — and the average home price is now $704,000. Local average wages in Whitefish are just $30,642, according to bestplaces.net.

Leona Maneval, an independent hospitality consultant who lives near Whitefish with her husband and children, is lucky to have anticipated the housing boom more than a decade ago.

“I left New York City 13 years ago for a different way of life,” Maneval said. “Being here, working here and raising our family here was such a great lifestyle change for us. Leaving New York for Montana was the best decision we ever made.”

And while this summer is at full capacity, places like Flathead Lake Lodge are now extending their seasons.

“We’re continuing to see high demand in our adults-only getaways in the spring and fall,” said Averill. 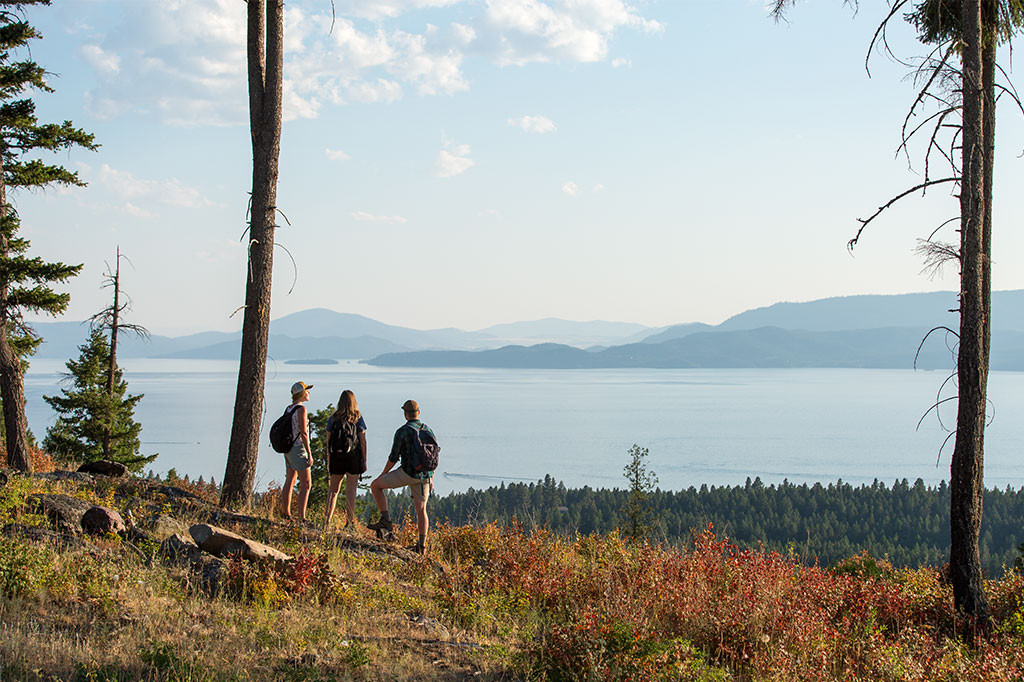