Thankfully, they don’t all need to get ranked.

New York City’s crowded field of Democratic mayoral candidates made their final pitch to voters on Wednesday night during a debate that lacked substance and was repeatedly derailed by petty squabbles.

The showdown — the last ahead of the ranked-choice voting primary on June 22 — left little room for the leading candidates to interact and allowed the others to waste time on attacking each other.

One fracas emerged while McGuire and Morales were bickering over whether to slash funding from the NYPD.

McGuire, a black banking exec, said that the “defund the police” movement would “end up in disaster for New Yorkers.” Morales, who identifies as Afro Latina, shot back: “You don’t speak for black and brown communities.”

It was one of several quarrels to break out during the messy two-hour match-up, which was co-hosted by Telemundo 47, Politico, Citizens Budget Commission and New York Urban League.

Brooklyn Borough President Eric Adams — who holds a solid 11-point lead in the primary — stayed above the fray as he was targeted by several of the other contenders.

Tech entrepreneur Andrew Yang, who landed in second place after Adams in a recent poll, hit the former police captain for failing to snag the backing of the Captains Endowment Association, the union that once represented him.

“The people who worked with him for years, who know him best. They just endorsed me,” Yang snapped.

Adams dismissed the attack, saying, “I said, months ago, I’m not taking any of the union’s endorsements.”

But Yang lashed out at Adams again later on in the event, when the candidates were asked to name the worst policy proposed by one of their rivals. He cited the longtime Brooklyn pol’s “advice to bring a firearm to church as a public safety measure.”

Adams also called out lawyer and civil rights activist Maya Wiley for paying to have private security patrol her leafy Brooklyn enclave while pushing to defund the NYPD.

“You don’t have a problem with safety with the private security you have on your block,” he said.

Another testy moment came after Yang touted his idea to get more mentally ill New Yorkers off the streets by adding psychiatric facility beds — prompting city Comptroller Scott Stringer to wag his finger and tell him, “You can’t say, ‘Psych beds for all.’”

The packed stage and petty asides didn’t allow for much new light to be shed on any of the candidates vying to lead the Big Apple.

Finally, in the last few minutes, the contenders were given a chance to showcase their personalities with some lighter questions, including who would perform at their inauguration and what they would ban to make New Yorkers more healthy.

Both McGuire and Donovan gave head-scratching answers. The first said he would ban “health-care deserts” and the other said he would somehow rid the city of food deserts and neighborhoods that don’t have parks.

Teachers union candidate Stringer said he would take school lunch junk food off the menu and Adams said he would stamp out schools without rooftop farms.

Meanwhile, Yang said he wants to put an end to the scourge of “ATVs” terrorizing the city. 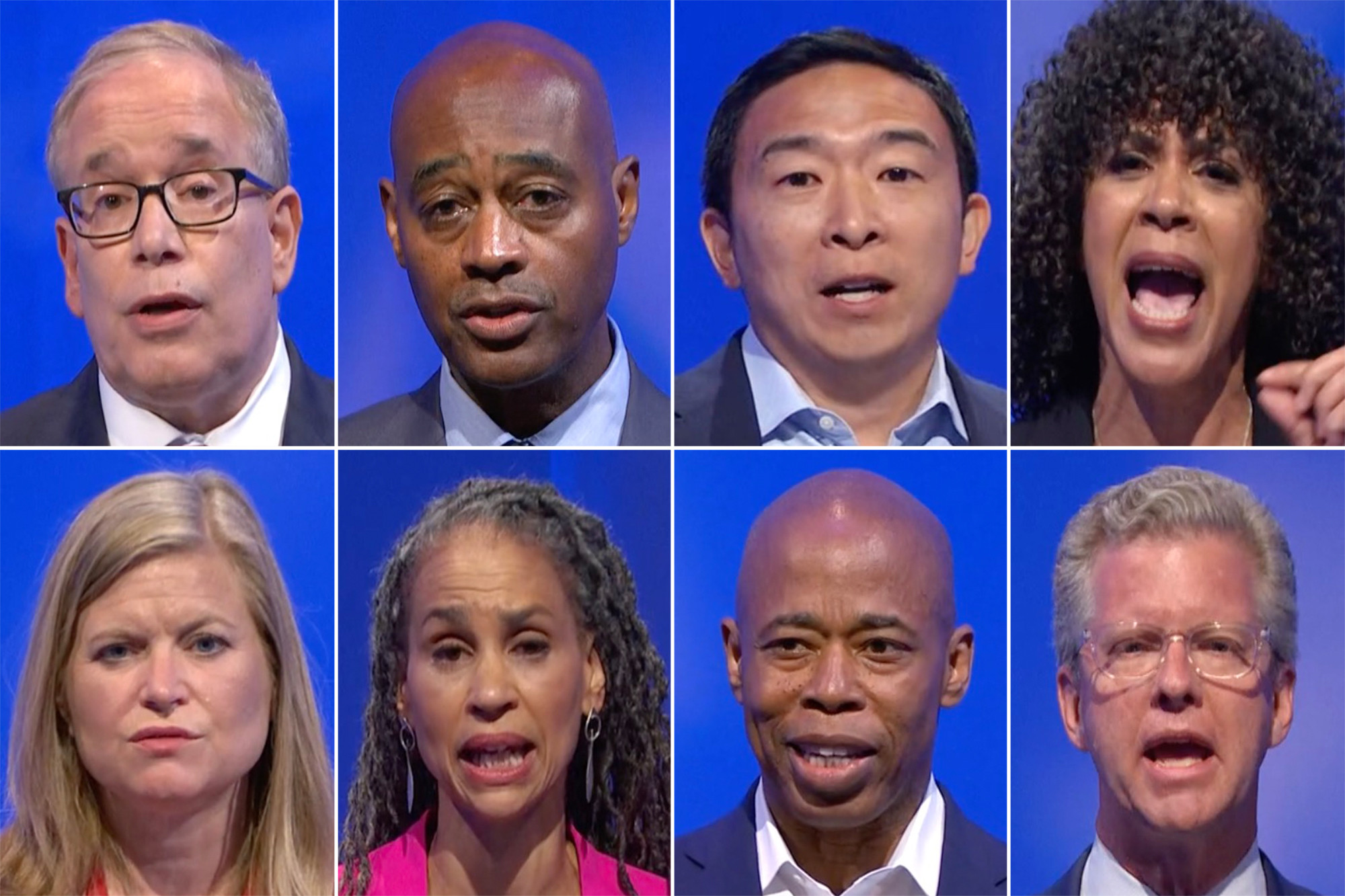