Detective Dennis O’Sullivan vividly remembers getting the call: a man was terrorizing residents of an apartment building, preventing them from leaving, and someone summoned police for help.

It was in 2019 and O’Sullivan and other members of the NYPD’s elite Emergency Services Unit responded — with no idea what was awaiting them.

“The decision was made for myself and two other guys to go in by the fire escape and grab him from behind,” O’Sullivan said. “We thought maybe he’d have a knife. It turned out he was holding two kitchen knives and had eight or nine other knives on his person.”

When things go very wrong in the five boroughs, it’s the ESU team that other cops call for a hand, a highly trained force of 500 officers who can tackle any emergency: building collapses, hostage standoffs, domestic violence situations, hazardous material.

They are the Navy SEALS of the NYPD — “Renaissance men,” as one ESU veteran calls them. They’ve been taught by the best how to rappel from a helicopter, dive into murky waters, conduct a SWAT raid and handle emotionally disturbed people, known as EDPs.

“We always say cops have a front-row seat to what’s going on in the world but in ESU we have a backstage pass,” O’Sullivan said.

“Most of us have specific skill sets, like we might be extra good at one thing like diving or rappelling,” the Riverdale native told The Post during a ride-along with a reporter last month with him and partner Jason Egnaczyk.

The two detectives, both 40, prowl the Bronx five nights a week in a squad of up to six officers, a Special Operations radio crackling in their patrol vehicle, two Colt M4 assault rifles in the back seat.

“We had one guy who worked as an underwater welder on an oil rig, so he’s great when we have to dive. But Jason’s good at everything. He just doesn’t talk much.”

The two can find themselves in life-and-death situations. Saving despondent would-be jumpers is common. One partner will place himself in a harness and tie off on the nearest secure structure while the other anchors him and monitors the rope, they said.

Soon they will welcome a new recruit.

Chris Bamfo, who twice got turned down when he applied for a coveted ESU spot, was finally accepted and on Friday he graduated from the ESU training school.

To make the team, Bamfo, 36, got up in the dark and drove from his Long Island home five days a week to Floyd Bennett Field in Brooklyn to what looks like a cross between a Disneyland for cops and the set of a disaster movie.

It was there on the shores of Jamaica Bay that Bamfo, a police officer who previously worked at precincts in Queens, spent eight months crawling through fake collapsed buildings, apprehending dangerous EDPs played by other cops, and prying open an old subway car with the “jaws of life.”

He also had to walk out onto what appeared to be a balance beam high in the sky.

“If you’re claustrophobic or afraid of heights or don’t like the water you’ll never make it here,” said ESU Lt. Keith Gallagher, 41, a former Army Ranger and Iraq War veteran who oversees the school. “But by the end of the training, you can do it all.”

Bamfo, a Marine Corps vet who saw action in Iraq and Afghanistan, failed to crack the rigorous ESU admission exam twice before finally getting in last September. Of the 350 applicants for this year’s training program, 35 were accepted, and 30 graduated.

He and the other trainees were taught how to keep their cool at the “TAC house.”

The structure — officially the Training Ammunition Combat House — is built to resemble a shabby old apartment. It’s where recruits are instructed on how to deal with indoor crimes, such hostage taking, domestic violence and EDPs who barricade themselves. The house, according to Gallagher, helps officers learn what to do in unpredictable situations.

“The goal is to slow down, break down the situation in a compartmentalized way and use non-lethal techniques as much as possible,” he said. “Many times these people (suspects or EDPs) aren’t listened to and they need to be listened to.”

Any shooting that takes place at the TAC house involves only “simunitions,” or training cartridges made out of soap.

Trainees must also negotiate through tunnels under a fake collapsed building while wearing a special breathing apparatus to make up for the lack of oxygen. The structure, just behind the old subway car where students learn how to disable a third rail, looks like a mass of Flintstonian rubble.

All ESU officers are scuba and EMT certified and have extensive training in weaponry. They learn psychological techniques at the John Jay College of Criminal Justice.

“The stuff I ended up loving at the school — the rope rescues and the scuba diving — was the stuff I didn’t like at first or was nervous about,” Bamfo said. “But mastering it all gave me an incredible confidence.”

All that training comes in handy.

So far this year, ESU has dealt with 214 barricaded suspects, 74 jumpers, 31 vehicle extrications — and 82,525 emotionally disturbed people, according to NYPD data.

On Thursday, the unit resolved a police standoff with an unhinged man in the Bronx who had climbed on top of his SUV with a beer in his hand and fired a gun at a police van outside a stationhouse.

“The thing about our Emergency Service Unit cops is that the more tense a situation is the more focused they are,” tweeted NYPD deputy commissioner John Miller. “This de-escalation in the Bronx was no different — and the outcome was a safe one.”

Bamfo said he’s looking forward to the “brotherhood” and the “creative problem solving” he sees as key to being in the ESU.

“If you make it through this course you know you achieved something great,” Bamfo said.

“And you’ll give something back to the city.” 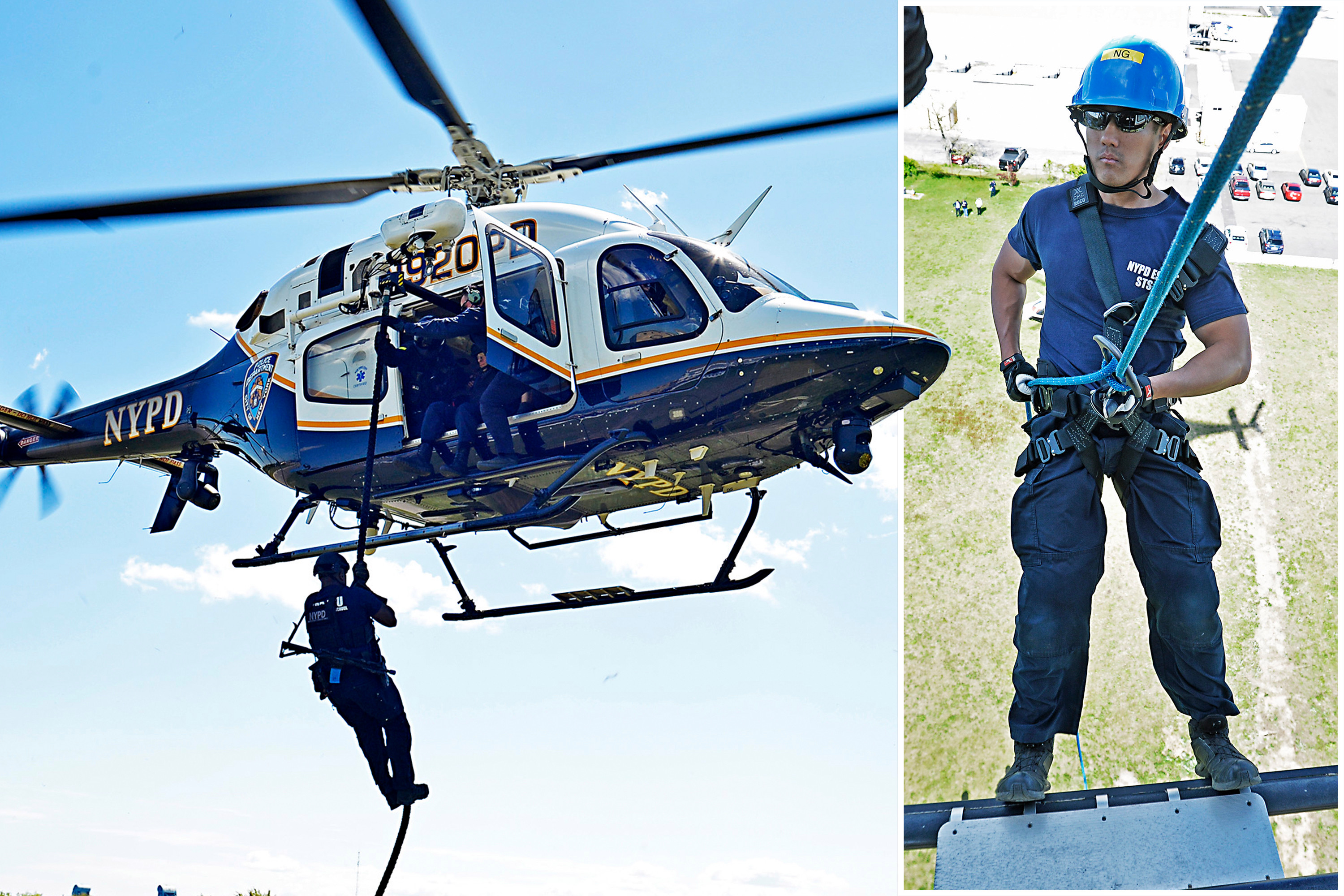