A growing legion of black parents in Queens say the Department of Education has failed their kids through mismanagement and neglect — fueling an exodus out of the public school system.

“There are a lot of black middle-class homeowners here,” said local activist Michael Duncan of the newly formed Students Improvement Association. “These are successful people, successful families. The results in our schools are not reflective of the community. Something is wrong here.”

Duncan said many families — including his own — have been forced to pay out of pocket for private schools in recent years due to DOE dysfunction.

Duncan and the grassroots SIA have begun collecting and analyzing district statistics and promoting awareness among local parents.

“I think a lot of parents knew that it was bad,” he said. “But they didn’t know it was this bad.”

Despite spending roughly $27,000 per student, PS 134 in Hollis saw only 6 percent of 5th graders pass their 2019 state math proficiency test and 17 percent hit that minimal mark in English.

The agency expended $25,000 per student at PS 118, where only 22 percent of 5th graders were proficient in English and 12 percent in math.

Overall, just 37 percent of black District 29 students in grades 3 -8 passed their 2019 English state exams while 28 percent were proficient in math.

Duncan asserted that the DOE and some public officials cast troubled schools as “under-resourced” to provide cover for mismanagement and mediocrity.

“It’s just simply not true,” he said, “Look at what is being spent. Where is this money going? Successful Catholic schools don’t spend anywhere near that. Small private schools in this district charge far less in tuition and are doing much better. There are public schools next door in District 28 that spend much less per student and are doing well.”

“The DOE’s first priority is employment,” he contended. “To keep the employment cycle going. In our district, a black district, whether teaching is done or not is secondary. The poor results we see for black children are not a function of funding. It’s not caring and not teaching.”

He contended that school employees can count on their salaries and pensions — while kids often emerge from their classrooms with little of tangible value.

A DOE spokesperson said the agency was prioritizing engagement with area parents.

“All students deserve a rigorous education that sets them up for success in school and life, and we have met with parent leaders in District 29 to hear their feedback and discuss their priorities,” said spokesperson Sarah Casasnovas.

Duncan – who organized a parent protest in front of District 29 offices Friday — said that principals have been allowed to preside over failing schools for years, despite minimal signs of progress and even regression.

He also highlighted that the DOE has tapped principals from troubled schools to serve as superintendents for the district.

Former District 29 superintendent Lenon Murray was fired from his post in 2017 after being sued for sexual harassment by an underling.

Current Superintendent Beverly Mitchell, who was accused in a subsequent lawsuit of backing Murray amid his troubles, ran an underperforming school in the district for years, Duncan said.

“If you want to improve a district, one would think that you would find a leader with a track record of achievement and turning things around,” he argued. “But instead, the DOE rewards those who have failed. We feel that it’s intentional.”

Dugue argued that similar hiring patterns would not happen in more affluent areas of the city.

“This would not even be contemplated in a white neighborhood,” he said.

State Sen. Leroy Comrie warned in 2019 that many middle-class black parents and high-achieving kids were fleeing the area’s public schools due to classroom disorder and urged the DOE to tackle disciplinary issues.

Parent Keisha Ellis, a warehouse manager, said her local principal told her that her son had unique talents — and advised her to take him out of his public school to realize his potential.

“She said he is a good student but you have to take him out because the school is failing,” Ellis said at Friday’s protest. “We’re here and we’re in this together and we need change. That’s why we are here.”

“Our continued investments in our school communities have led to record-high graduation rates, record-high college enrollment rates, and record-low dropout rates, and we will work closely with the district to strengthen the progress we’ve seen in student achievement,” she said. 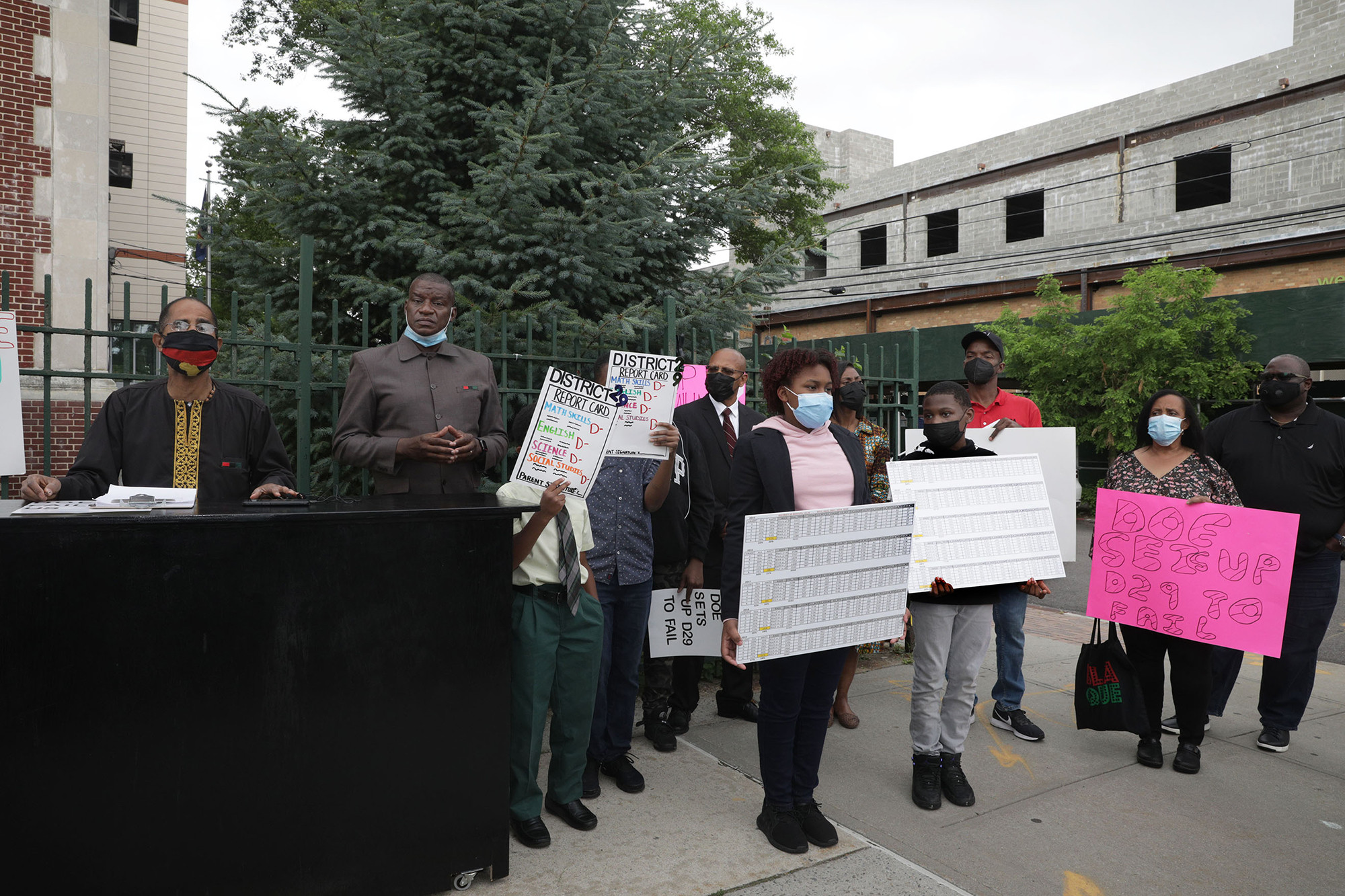