From sexual companions to COVID-19 nurses, robots are increasingly dominating the human experience.

They’re rolling into our everyday lives as digital sidekicks designed to more safely, efficiently and speedily take on our tasks. And while some bear humanlike appearances and mimic human emotions, they’re being programmed as our friends, not foes.

The tech company created the autonomous robo-waiter, the Matradee.

Invented to expedite food service at restaurants, the Matradee — which speaks several languages, tells jokes and sings “Happy Birthday” — can read QR-code orders and deliver meals from the kitchen to the customer.

“These robots aren’t taking jobs away from waiters,” Zhong insisted. “Like cellphones, they’re just tools that can help people do a job better.”

This week it was announced that online retail giant Amazon is prototyping brawny bots — nicknamed Bert, Ernie, Scooter and Kermit — to assist the company’s 1.2 million fulfillment-center employees in the lifting and lugging of heavy boxes. The company says its goal is to cut down on worker injuries at its warehouses — which tallied nearly 27,000 last year.

Here’s a look at some of the hardware that’s being hardwired to take on human work.

This robot puts the “art” in artificial intelligence. Equipped with 3D cameras and a nozzle, rather than a cosmetology license and hands, the Clockwork Minicurist does nail-paint manicures in less than 10 minutes for only $8.

“The customer inserts a cartridge of polish into the device, similar to loading a pod in a Nespresso machine,” said creator Renuka Apte. “The customer then places their hand on our hand rest and says, ‘ready,’ and the robot paints their nails one finger at a time.”

Apte and her Clockwork co-founders tested the Minicurist out on customers with a pop-up nail shop in San Francisco last month. Over the next few months, Clockwork — backed by Reddit founder and husband of tennis champ Serena Williams, Alexis Ohanian —  plans to roll out the Minicurist in corporate buildings, retail stores and airports.

“It cannot replace nail techs at a salon,” Apte said, noting it doesn’t use gel nail polishes nor does it do nail-art designs. “The automation gives users another option when they need affordability, when they’re in a hurry or when they just want a new nail color and not the full salon experience.”

Meals on wheels takes on a whole new meaning when it comes to robot restaurant worker, the Matradee.

Rolling up to customers as a waiter’s wordless assistant, the 4-foot-tall automaton carries up to 80 pounds in food orders or whisks away plates. Outfitted with four heavy-duty trays for shuttling multiple entrees or dirty dishes, the Matradee is decked out with smart-sensing navigation features such as infrared cameras that scan its surroundings and Lidar sensors to detect and avoid incoming obstacles from six feet away.

The battery-charged bot can work 12 to 14-hour shifts, and will mount itself onto its charging base when work is done. Just needs a real live person to load its trays.

It recently saved the day at Ocean City, NJ, eatery the Island Grill.

“She’s been a great help to our team,” said restaurant owner Allison Yoa. She and her husband Andrew leased the bot — theirs is nicknamed “Peanut” — from Richtech in May when their restaurant suffered a waitstaff shortage brought on by the pandemic. (Richtech Robotics declined to give price specifics, but said the Matradee is about 1/3 the cost of employing a full-time waiter.)

“She definitely doesn’t take the place of a human employee, but she does make service a little easier.”

Move over comfort pets, the Purrble is coming to comfort kids of all ages with high-tech health care in the form of a robotic plush toy.

“It’s a tool to help kids self-soothe and to help them manage their emotions,” said creator Aaron Horowitz. “It provides this mirrored empathetic experience.”

Running on two AA batteries, the Purrble has a palpable haptic heartbeat. When a child picks it up, its heart is beating really fast. But as the kid gently and repeatedly pets it, its heartbeat begins to slow down, and it purrs.

“When you calm something else down, you learn how to calm yourself down,” said University of California Santa Cruz professor Katherine Isbister.

She — along with Oxford University researcher Petr Slovak — helped Horowitz develop Purrble, which was introduced to the market in August amid elevated anxieties spurred by the pandemic.

“We’ve received some beautiful feedback about Purrble playing a critical role for children that were really struggling with virtual learning or feelings of loneliness during shutdown,” Horowitz said of the electronic therapy doll’s impact.

It’s available on Amazon for $49.99, and it’s marketed to customers ages 3 to 103. “Even adults who had trouble adjusting to the stress of working remotely or the mental health wear and tear of the pandemic found Purrble to be an incredible source of emotional support,” Horowitz said.

Robo-room service is here. And while bots are popping up in hotels as varied as Times Square’s Yotel (where they store guest luggage) and Chicago’s Hotel EMC2 (where Cleo and Leo deliver room service), perhaps none are as sophisticated as the computational concierges at South Africa’s Hotel Sky.

Created by CTRL Robotics, the machines come equipped with sophisticated cameras and scanners that allow them to mimic human senses and responses. They can even scan guests’ faces to determine their mood.

The high-tech hospitality workers function on specialized batteries, and they each take turns working six-hour shifts alongside their human co-workers at the swanky lodge in Johannesburg. When they’re not busy providing a service, Lexi and her cyber siblings entertain guests by striking poses for selfies or providing important hotel information — like which floor the pool’s on.

Once work is through, the bots escort themselves back to their individual docking stations for recharging. These artificially intelligent cyborgs, first launched in January, trail robot hospitality workers in Japan — which introduced the world’s first fully robot-run hotel in 2015.

Health-care humanoid Grace is the latest essential worker to join the front line in the fight against COVID-19.

Dressed in nurse scrubs and speaking in a warm cadence, the socially intelligent robot can listen and speak, while a thermal camera in its chest takes patients’ temperatures and measures their responsiveness.

“I can visit with people and brighten their day with social stimulation,” Grace said in a video for Reuters. “[I can] entertain and help guide exercise. But also I can provide talk therapy, take bio-reading and help health-care providers assess [a patient’s] health and deliver treatments.”

Grace, developed in Hong Kong by Hanson Robotics founder David Hanson, was designed to interact with the elderly and help engage folks affected by the global health crisis.

The medical machine’s humanlike features and ability to fluently communicate in English, Mandarin and Cantonese endears her to patients as a cheery nurse’s aide rather than a menacing foreign intruder.

“A humanlike appearance facilitates trust and natural engagement, because we are wired for human face-to-face interactions,” Hanson told the outlet. He noted that the cost of making Grace is currently comparable to that of a luxury car.

But costs will likely decrease when his company, in partnership with robotics developers Awakening Health, begins mass manufacturing Grace for deployment throughout medical facilities in Asia in 2022. 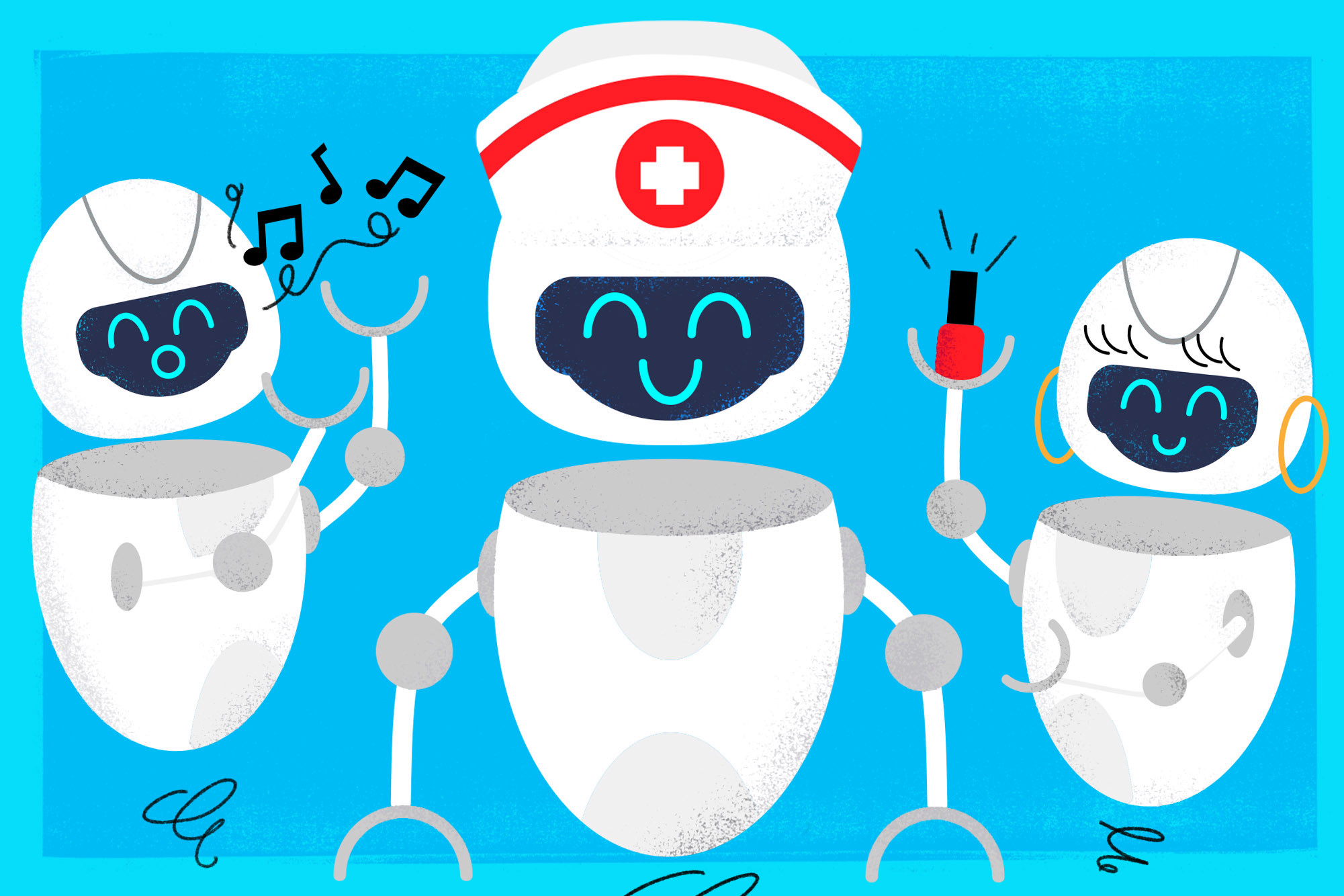