Goodbye depressing nursing home! These golden oldies are living out their latter years in the lap of luxury.

The city has 1.1 million adults who are 65 or older, according to the most recent report by the NYC Department of Health and Mental Hygiene.

They comprise 13% of the population, and around 3% live in a senior development. That number is expect to grow as the number of Americans ages 65 and older more than doubles over the next 40 years.

Now residential developers are seeing dollar signs and investing in the most luxurious, perk-packed communities for seniors that New York City has ever seen.

“Look at this environment and what we have,” said Bill Morin, 78, standing on the rooftop terrace of the Watermark at Brooklyn Heights, a luxury senior community with assisted living that debuted in October. “Living here is like staying at a high-end hotel that you don’t ever have to leave.”

Overlooking the East River and Statue of Liberty, the building’s roof space is a picturesque oasis of green plants and flowers. A jazz band performs for the gray-haired brunch crowd in the building’s lounge, an elegant room with a bar with wines from France and California on display.

The $330 million, 16-story tower, located in the former Leverich Towers Hotel at 21 Clark St., the building has 275 apartments including 145 for independent living, 88 for assisted living and 42 for seniors with memory-related illnesses such as dementia.

Part of the Elan Collection, a portfolio of upscale senior living developments, the community has 25 occupants so far with more scheduled to move in over the coming months, according to membership director Michael Flores. Prices begin at $8,245 a month for independent living and span up to $16,995 for memory-care residents.

That might sound steep but it includes access to 55,000 square feet of amenities — including two restaurants, a coffee bar with made-to-order green juices and smoothies and pastries baked in-house, a movie theater, a spa and salon, yoga studio, fitness center, infinity pool, wine bar and arts studio.

The contemporary design of white interiors, cognac leather seating and large windows is notable and a collaboration between Andres Escobar, behind trendy hotels such as Hotel 42 in Williamsburg, and architect Richard J. DeMarco, who has worked on projects such as Hudson Yards.

Morin, a former executive coach for companies such as General Motors, chose to move into the community after health complications left him needing extra care.

“I’m watching a Fellini movie on one day, learning about Matisse the next and get to drink my favorite chardonnay whenever I want,” said Morin. “What could possibly be more enjoyable?”

Watermark is just one of a bevy of new high-end residences marketed to the deep-pocketed social security set.

Also breaking the stereotype of what a traditional nursing home can be are the 215-room īnspir in Carnegie Hill, 305 West End and its sister property Bristal at York Avenue, and Sunrise at East 56th Street.

There are around 140 senior living communities in New York, said Cynthia Perthuis, the owner of the Senior Care Authority franchise, a consulting company in the city that helps match seniors with communities.

But these new entrants to a long-existing landscape stand out because they could easily be mistaken for one of the city’s splashiest new condo towers.

They’re also significant as reactions to the darkest days of the COVID-19 pandemic when more than 15,000 nursing home residents died — a disturbing number allegedly covered up by Gov. Andrew Cuomo’s administration.

“Of course, seniors have died in upscale communities, but the majority of the deaths that happened during the pandemic were in skilled nursing facilities, which are essentially hospital settings,” Perthuis said. “They’re unlike [these upscale] communities where you have the option to live independently.”

Indeed, īnspir, a $315 million venture in Carnegie Hill, may be the snazziest of them all.

After opening in March, the 23-story tower welcomed residents and visitors in a gleaming white and spacious lobby with marble floors, high ceilings and a chandelier that was handblown in Italy by Seguso, a renowned glass brand from Venice.

A wall of green onyx, bespoke contemporary carpets and custom-made furniture from London add to the look.

A sleek dining room, similar to one at any buzzy eatery in the city, is off the lobby, where a bar is lined with top-shelf liquor.

Amenities include a saltwater pool, two fine dining restaurants, an open-air lounge on the 17th floor, a fitness center and a Mercedes-Maybach house car to drive residents around.

Gardens abound throughout the building, and the programs are a highlight: They include classes in art and music therapy, happy hours, live performances, aquatic therapy and even horticulture therapy.

Living in īnspir has been critical to her husband’s physical and mental well-being, said Ada Samuelsson, 74, a Midtown resident who declined to share her husband’s name. He has dementia, she said, along with other ailments, but the community’s staff and myriad amenities have helped keep his health under control.

“He loves living here because he grew up on the Upper East Side, and I love visiting him here,” she said. “The food is excellent. He’ll have spaghetti carbonara, and I love the salads and crab cakes. I also like having wine or champagne sometimes.”

īnspir, said Samuelsson, feels nothing like a facility. “It’s like being in a beautiful home,” she said.

But one of the first developments to pioneer this new approach to senior living was 305 West End, which opened in 2016. It offers a long list of amenities and stands out for its programming, which includes a collaboration with NYU Tisch Drama school where drama therapist students work with residents who have memory loss.

Lola Jennings, 84, is a resident who lives in a one-bedroom apartment and said that she’s spoiled with the diversity of classes and amenities she has at her fingertips.

“I learn all about art history and music and meet wonderful people,” said Jennings. “And around me, I have the throbbing life of New York.”

Assisted living studios at 305 West End start at $8,200 a month per person, and housing for memory care residents starts at $17,850 a month.

The development’s sister property, the Bristal at York Avenue, is scheduled to open on the Upper East Side in August. With 132 apartments, the building offers boutique-style living with a dining room and terrace on every floor.

Sunrise, on the corner of Lexington Avenue and 56th Street, is also gearing up to open this summer. It has a full lineup of amenities and programs and a particularly eye-catching aesthetic courtesy of Champalimaud Design, a company behind the interiors of many renowned hotels including the Little Nell in Aspen, Colo., and the Hotel Bel-Air in Los Angeles.

Perthuis likens this new wave of communities to cruise ships on land.

“You have everything you need to live a full life,” she said. “You have access to the best doctors and medical facilities.”

And while their high prices suggest that these communities are just for the ultra-elite, Perthuis added that this isn’t necessarily the case.

“These seniors aren’t always super-rich,” she said. “Many of them have planned well for their long-term care and when you add up the benefits, the price can seem reasonable.” (The cost to live in these developments generally includes housing, meals, laundry, medical care and activities.)

“The money is absolutely worth it for the quality of life I have,” said Morin.

Samuelsson agrees and adding that īnspir improved her marriage.

“We used to fight all the time when [my husband] lived at home,” she said. “Now that he is stimulated and happy, we enjoy each other’s company. He is even wearing his wedding band for the first time in our 20-year marriage. We have fallen in love all over again. That, to me, is priceless.” 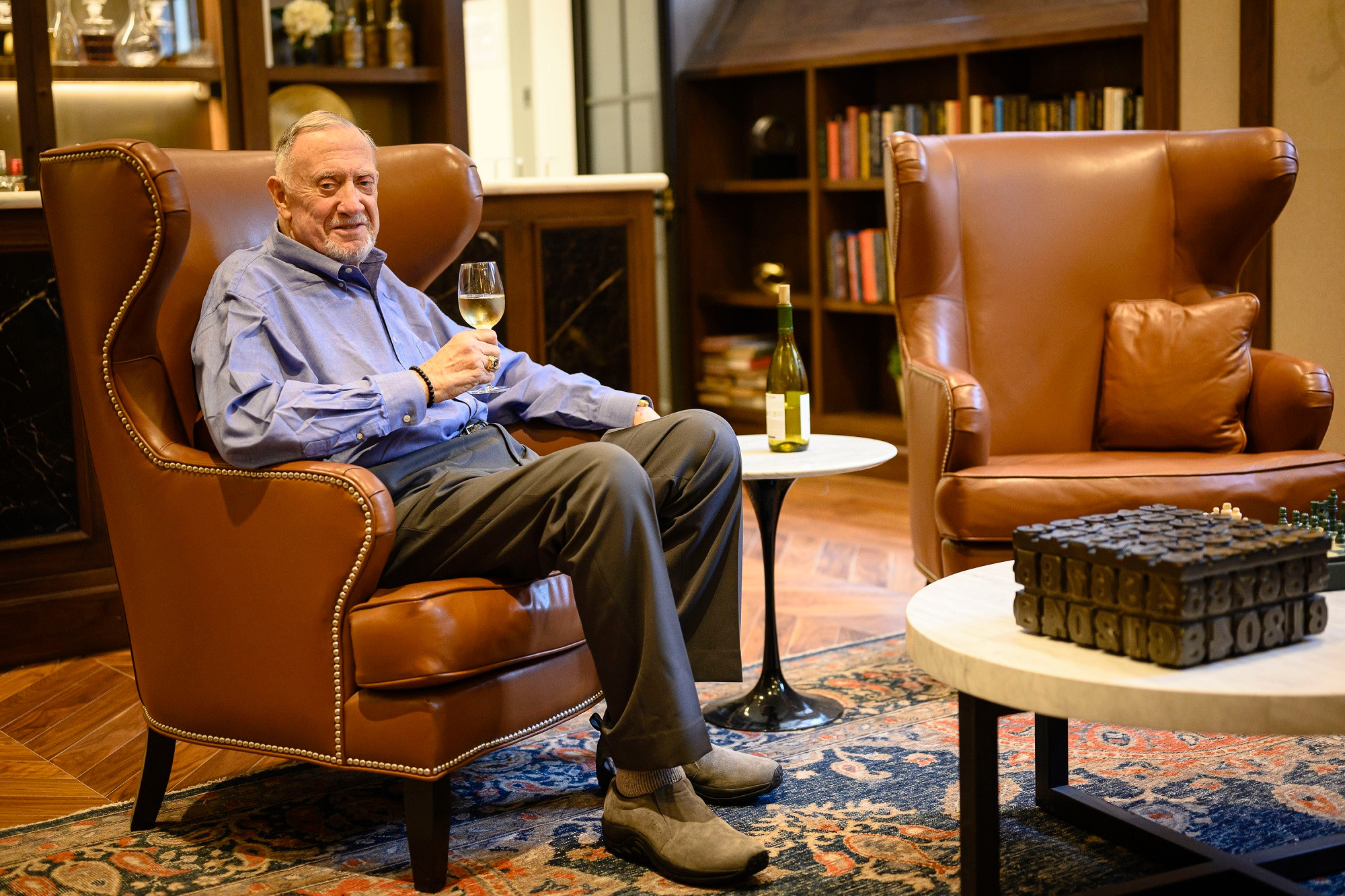