New York state shed some 1,000,000 jobs during 2020 — a staggering 10 percent of the state’s workforce — according to the state Labor Department. For some people, though, the pandemic turned out to be a blessing in disguise. Meet four locals who found a way to pivot from their old careers and take a leap of faith toward their passions.

Ronnie Pichson and Stefon Davis used to commute together every day from their home in Park Slope to their Fashion District jobs on motorcycles — a Yamaha for Pichson and a Kawasaki for Davis. But they spent their days worried about whether their bikes had been towed, dinged or stolen on the street.

Pichson had worked for more than 20 years at Calvin Klein as a technical design director (“I was known as the blouse king,” he said), while Davis was employed in design and fabrication for a private label for 18 years. But when the married couple were both furloughed, then laid off last year, their next steps — and next meals — were suddenly in question.

“I was in the process of going to get our home appraised, looking at our 401Ks … Our days became, ‘What are we going to eat? And how can we eat it?’” said Pichson of their money woes.

But Davis had an idea — what if they turned their hobby into a career? And so Gotham Depot was born: a luxe motorcycle garage. “A hotel for motorcycles,” Davis, 47, calls it. “Our place is very unassuming, kind of like a speakeasy.”

“No one else had done this — it didn’t exist,” said Pichson, 54, adding that other motorcycle garages tend to be dirty, cramped, grungy.

In October they opened their 3,250-square-foot Greenpoint space, which offers oversized spots with private lockers and aesthetic touches like a leather Chesterfield couch to create a clubhouse feel.

The 51 spots are are now 80 percent full, with members — including a former Samsung board member, as well as Internet execs and chefs — paying up to $300 per month.

“The pandemic made us look at ourselves in the mirror,” Davis said. “This allowed us to dream again.”

Marketing to books — and pickles — seller

Leigh Altshuler had a high-flying career in marketing — that vaporized
when the pandemic hit. Unable to find work quickly, she decided to make the
most of what she had always wanted: free time to read.

As other New Yorkers began leaving the city for good, Altshuler gratefully snagged the books they didn’t want. “I’d hear about people moving and offer to buy their books,” said Altshuler, adding that she got some for free. “I had nothing better to do than walk up five flights of steps and bring down 48 boxes of books.”

The idea for a book store —which has turned out to be Sweet Pickle Books, now at Orchard Street, near her Lower East Side Home — had already begun to take shape. “I would go on walks and think about what mattered to me,” Altshuler said. “I think bookstores are magical – especially when everything is online and on-screen. I wanted to reconnect with things that are real: Books in a bookstore.”

Inspired by her mother’s favorite movie, 1988’s “Crossing Delancey” — about
a pickle peddler falling in love with a book dealer on the Lower East Side —
Altshuler decided to add homemade pickles to her inventory.

“Everybody told me I was crazy. But I was not going to sit and wallow,” she said. “And things are going well. The store is busy. Some customers come in to buy books and leave with pickles. Others are the opposite. Today I’ve sold pickles with every book sale, but I also have regular pickle customers who never buy books.”

In the process, she and her store have become part of the community: “People come in to read or do homework or even kill time when they’re locked out of their apartments.”

Business was booming for Tomoe Food Services. According to owner Naoki Takeshige, it was one of just two New York-based wholesalers handling coveted A-5 beef shipped in from Japan. High-fat and buttery, the meat is imported in limited quantities and sold to elite steakhouses such as Cote, American Cut and Steak 212.

But then Covid hit and many high-end restaurants shuttered. “We lost 65 percent of our business and got stuck with a lot of meat,” said Takeshige, president of Bronx-based Tomoe. “Luckily there was space in our freezer but I was getting nervous.”

Tomoe trundled along by selling meat online to individual consumers. But that was not enough. He then came up with a crazy idea that suited a crazy time: Take advantage of a market in which restaurants were shutting down and open his own on the cheap.

“We looked at 25 restaurant [spaces] but wanted one we could move into and open right away,” he said. “We did not want to do a million dollars of work on the place.”

The East Village spot that once housed vaunted sushi specialist Jewel Bako fit the bill, although growth has been slow. “I want to do $300,000 in business per month,” Takeshige said. “Right now we are almost breaking even.”

But Takeshige has embraced a Japanese saying about the good that can be found in unpleasant situations.  It translates to “the pinch is your chance.”

“This is the time for me. It is going to be good,” he said. “The situation we were in, it was my pinch.”

As the pandemic throttled NYC, no one was hiring professional home organizers.  For Allison Dunn, who had spent most of 2019 striving to be a Brooklyn version of Marie Kondo after losing her job in the marketing department of a Manhattan architectural firm, COVID-19 killed her second career.

Dunn, a married mother-of-one, refunded deposits to clients, finished a children’s book she had begun writing (“Khison is Having Company,” with organization as its plot) and happened to spot an empty Prospect Lefferts Garden storefront that looked perfect for a coffee shop.

“I’ve always wanted to own a café!” said Dunn, who recruited a friend as a co-owner. “Everything for me is about happiness and joy. I thought this could do it.”

But Dunn needed a signature beverage. She retooled a tangy sorrel drink, from her homeland of Jamaica, into a more American-style hibiscus tea and named her new venture Hibiscus Brew. Brooklyn-made baked goods and six smoothies round out the menu.

With reggae on the sound system, a casual vibe and a riot of pink flowers out front, Dunn feels thrown back to the island she left 10 years ago. Business is going so well that she ditched a more extensive food menu. “We were running out of space and getting too busy for food — that’s a good problem,” she said. “The pandemic gave me a third occupation. Isn’t that amazing?” 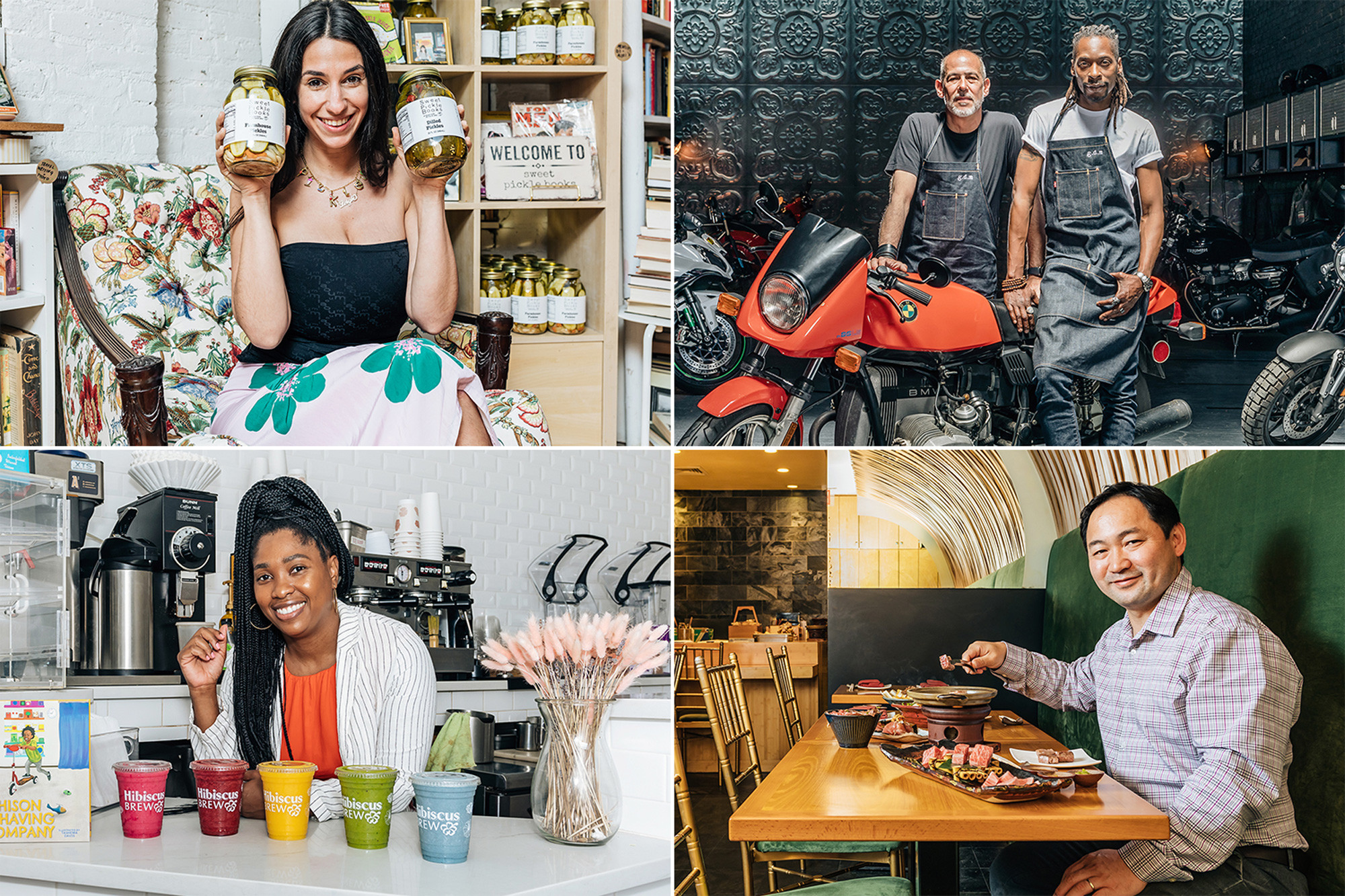