Curtis Sliwa has a message for tourists visiting the Big Apple: “If you hear gunfire, you better duck!”

The Republican mayoral candidate shared the grim warning on Monday — a day after a Marine was struck by a stray bullet in Times Square, a month after three innocent bystanders were also injured in a broad-daylight shooting in the Crossroads of the World.

“You need everyone you can get in this area now because there’s a crime crisis, it’s the wild, wild West!” Sliwa said in Times Square about adding more cops to the tourist hotspot — a measure that officials announced earlier Monday.

“Yesterday, I was warning tourists, I was saying, ‘Welcome to New York City. Hopefully, you’ll have a safe time. You’re not going to get COVID-19 but you might get lead poisoning,’ ” he said. ” ‘If you hear gunfire, you better duck!’ “

“I mean, this headline, this front page says it all,” Sliwa said.

The Guardian Angels founder criticized Mayor Bill de Blasio — who on Monday promised cops would “flood” Times Square — for being “MIA” in the tourism hub immediately following the broad-daylight shooting.

“De Blasio should’ve been here yesterday to reassure residents, the tourists, the merchants who are coming back, the life that’s beginning to re-emerge after the end of this pandemic that, ‘We’re going to crack down on crime in Times Square,’” said Sliwa during his press conference, with fellow red beret-wearing men standing behind him.

“And yet, [he was] MIA, like he is in all crime situations.”

To combat the surge in shootings and other incidents like the one Sunday, the famous transit patroller suggested the city bring back its plainclothes anti-crime unit, which was scrapped in June 2020.

“These women and men were like thespians,” said Sliwa.

The Republican mayoral nominee pledged to effectively use the “heroic” anti-crime unit personnel if he pulls off an unlikely victory in the heavily Democratic Big Apple.

“I’m telling you from day one when I become mayor, those heroic men and women are going to be out there,” he said.

“Without these men and women out there from Midtown north to Midtown south, you’re going to continue to have this aggressive activity, continue to have fights and disputes that lead to stabbings and shootings.”

In addition, Sliwa said Rikers Island — which is slated to be replaced with four new jails — shouldn’t close its doors.

Sliwa’s likely Democratic opponent in November, Eric Adams, who holds a 10-point lead in the first round in the ranked-choice voting election, said the shooting is a “chilling reminder” of the increased gun violence in the five boroughs.

“The news of another shooting in Times Square, in broad daylight, is a chilling reminder of the rising threat of gun violence across our city,” Adams said in a statement Sunday night.

“We cannot have a real economic recovery from COVID-19 if our centers of business and tourism are perceived to be unsafe,” the statement went on. “The leaders of this city, both now and going forward, must be committed to both the intervention and prevention measures needed to save lives.”

“Curtis Sliwa for mayor of NYC,” sang the shirtless man, whose real name is Robert Burck, “’cause he’s the best choice New Yorkers will ever see.” 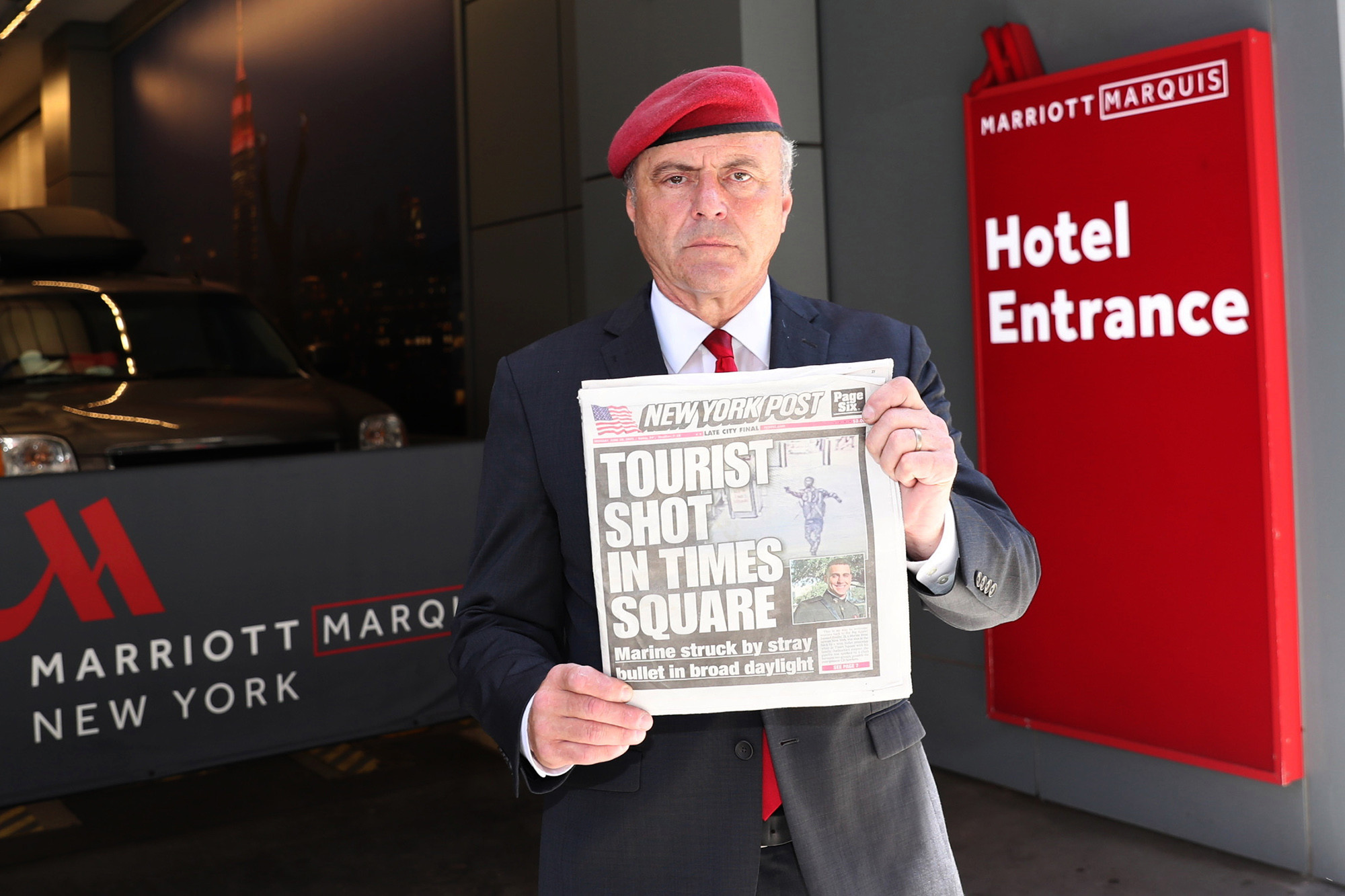