He put a twist on his marriage proposal.

A pair of Kansas storm chasers brought new meaning to “whirlwind romance” after getting engaged in front of a massive tornado.

“I can’t really have a better word for this — but it was absolutely unreal,” Wichita’s Raya Maday told Kansas.com of the magical moment, which occurred Memorial Day.

Maday and her boyfriend Tom Bedard, both of whom work for AccuWeather, had reportedly driven six hours to Colorado to glimpse “our first tornado” together — and when the destructive dervish touched down, her future hubby got down on one knee and proposed.

An accompanying video posted to the AccuWeather Instagram and Facebook pages shows the “2012”-evoking marriage proposal, which Bedard had reportedly been meticulously planning for months.

Bedard and Maday first met in 2016 at a meteorology conference in New Orleans, whereupon they quickly bonded over their mutual love of weather, Yahoo reported.

“We’ve always been pretty heavily connected in the weather community,” Maday said. “Even from the day we met.”

Shortly thereafter, the aspiring storm chasers were hired to work at AccuWeather in the company’s Wichita office, with Bedard working on emergency management and his better half forecasting severe weather.

During their time, both taught each other a lot about storms, although “Raya is unquestionably the meteorologist,” Bedard told the Daily Mail.

Bedard dreamed up the idea for the twister proposal as both were passionate about the weather but hadn’t “seen a tornado before,” he said. Unbeknownst to him, “Raya was thinking of chasing storms at about the same time,” Bedard said.

He added, “This was, oddly enough, an idea that we both had without letting the other know. I planned out the logistics of it with my close friend and fellow meteorologist Rich Putnam at the same that Raya was talking about it with Rich’s wife, Steph.”

An opening finally came when NOAA Storm Prediction Center issued a forecast for severe weather on Memorial Day with a level 2 out of 5, with five 5 being the highest, Yahoo reported. Inside that window, there is a slight chance of a tornado.

Determined not to miss their opportunity, the couple embarked on their storm chasing expedition along with several friends who were in on the proposal plan. Tom had also snuck along a wedding ring in preparation to pose the question — should a twister present itself.

The meteorologist was initially worried about “not having a storm initiate,” he said.

“We had already driven so far,” fretted Bedard. “I was already anxious about taking us all the way to southeast Colorado on a slight-risk day and coming back without putting a ring on her finger … I thought ‘Oh God, no, we’re going to do all this travel for nothing.’”

Thankfully, they were able to locate a Twister, and Bedard dropped the question as it touched down in the distance at around three or four o’clock.

“My mind was a mess in a rush of adrenaline just hoping that I could remember the speech that I had practiced and deliver it perfectly for her,” recalled the anxious tornado tailer.

Meanwhile, Maday recounted “I was thinking ‘What a beautiful storm structure!’ just as the tornado dropped to the ground then I turned to my right to see that Tom’s left knee is also touching the ground.”

“It was a moment that I don’t think I will ever forget,” said the flabbergasted forecaster, who added that if “‘Twister’” had a sequel, it would go a little like that.”

Unfortunately the moment was short-lived: right after saying yes, Maday and her hubby-to-be had to flee to the car to escape the whirling death vortex as well as an accompanying lightning storm, Yahoo reported. Thankfully, she only got swept off her feet figuratively.

Bedard later cautioned potential imitators to “work with a good meteorologist and be really, really safe” before proposing during a tornado.

The storm-chasing soulmates haven’t started planning their wedding yet, but both think that Tornado Alley – a twister-prone area in the US Midwest and Soutwest region – would be the ideal place to tie the knot.

“More than likely, we’re probably going to see another tornado when we get married,” said Bedard. 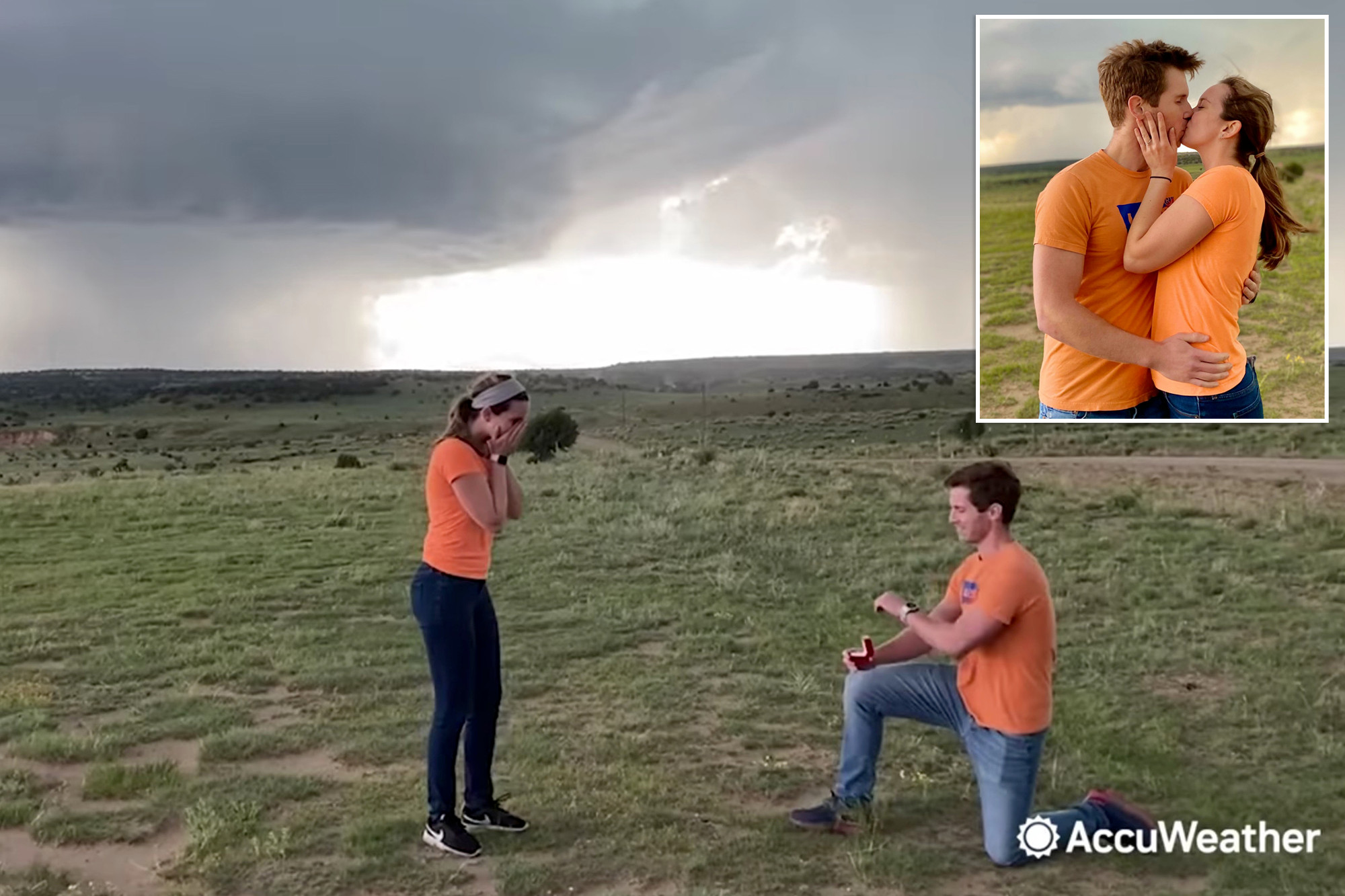