That’s a lot of postage.

The world’s most unique and expensive stamp is expected to fetch up to $15 million at auction on Tuesday. Sotheby’s New York will host the sale of the coveted British Guiana One-Cent Magenta, known as “the Mona Lisa of Philately,” owned by footwear tycoon Stuart Weitzman.

The shoe designer is set to donate the proceeds to charity, opening up a new chapter in the history of the scrap of paper that is 165 years old.

“We expect a substantial amount of funds from the sale,” Weitzman exclusively told The Post, explaining that he is “an avid collector of rare stamps.”

In 2014, he successfully bid on the One-Cent Magenta for a record $9.48 million. In keeping with many of its earlier buyers, he added a signature mark to the back.

“I drew a stiletto to memorialize my years of ownership,” he said. The stamp also bears Weitzman’s initials.

The outline of a single high heel appears next to a mark by eccentric millionaire John du Pont. The chemical heir, portrayed in the 2014 movie “Foxcatcher,” bought the stamp in 1980 for $935,000, some 30 years before his death during a jail sentence for the murder of Olympic wrestler Dave Schultz. Nobody knows whether du Pont anticipated what turned out to be an eye-popping investment. Its appeal rocketed among salivating philatelists. Their dreams of possessing the stamp resulted in its value increasing exponentially over the next decade and a half.

The succession of owners is indeed fascinating, but Sotheby’s special consultant Robert Scott, an expert in philately (the study of stamps), said the origins of the One-Cent Magenta are equally remarkable.

Revered among collectors as the only one of its kind, it was produced in 1856 in Guiana, the former British colony now called Guyana, on a printer usually reserved for newspapers. The emergency run was authorized after a delivery of stamps failed to materialize. Nearly all the stamps were used to distribute copies of the local rag. Despite their beauty, most were discarded by the recipients.

Scott, referring to the sole octagon-shaped stamp which dodged the trash, said: “From a distance, it looks like just a smudge of red.” But he pointed out that “up close and personal, it takes on many different shades of magenta with a certain patina.”

In 1873, it caught the attention of 12-year-old Louis Vernon Vaughan as he cleaned out his uncle’s attic in Guyana. Soon after, in what enthusiasts term the “worst stamp swap in history,” he sold it to Neil Ross McKinnon for 6 shillings – around $17 in today’s money.

The treasure then bounced between rich philatelists, including the exotically named Philipp de la Rénotière von Ferrary. The Austrian citizen was forced to give up the stamp, valued in 1922 at $35,000, when his collection was seized by the French government as reparations for World War I.

Subsequent moneyed guardians ranged from New York fabric magnate Arthur Hind to Irwin Weinberg, the head of a collectors’ consortium. Hind frequently traveled with the One-Cent Magenta in a briefcase handcuffed to his wrist. “He remarked that he no longer felt he owned the stamp, but it owned him,” Scott said.

According to Scott, the 1-inch square piece of memorabilia reached mythical status after its 1980 acquisition by du Pont. The fabulously wealthy recluse hid the stamp from prying eyes while reportedly treating it with disrespect, sometimes handling it without gloves.

“It disappeared from public view,” said Scott, noting how the One-Cent Magenta is the only 19th century stamp missing from the British and Commonwealth Collection of Queen Elizabeth II, who has an estimated net worth of $500 million. Her grandfather, George V, tried to buy it twice, but was thwarted on each attempt.

Now, after seven years belonging to Weitzman – mostly spent on display at the Smithsonian National Postal Museum in Washington DC – it’s up for grabs again.

In the weeks leading up to the June 8 auction, the stamp has been stored in a darkened, climate-controlled room and guarded round the clock by security staff.

A master of discretion, Scott won’t comment on interested parties poised to fork over a forecasted $12 million to $15 million. Who knows if celebrity philatelists like former French president Nicolas Sarkozy or Hollywood actor Patrick Dempsey will place a bid?

But the UK-born specialist can’t help but wonder whether a generous fan of the British monarchy might rise to the occasion. Perhaps they will try and complete the priceless stamp collection owned by the troubled House of Windsor. After all, it’s unlikely the increasingly p.r.-conscious royals would show such extravagance themselves.

Scott quipped: “There might just be somebody out there who would like to make a donation to her majesty the queen.” 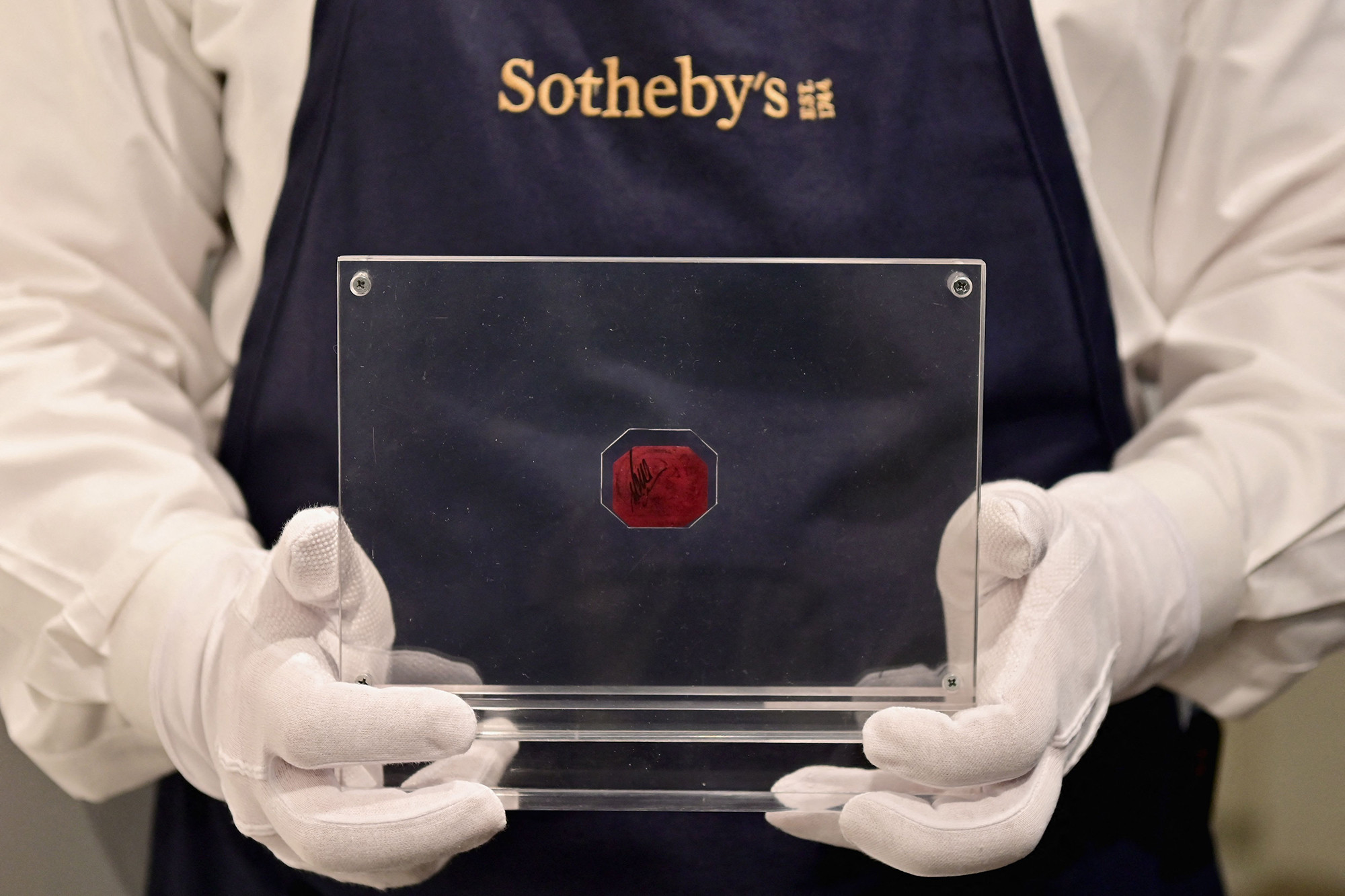